The Trigrad Gorge is a nature landmark, one of the most impressive in Rhodope Mountains. It is actually the third longest gorge in Bulgaria after Yagodina Gorge and the gorge near the town of Trun. It is located in the western parts of Rhodopes next to the village of Trigrad. The distance from the nearest town Devin is 26 kilometres and from the biggest town in Rhodopes – Smolyan – about 70 km.

The area of Trigrad was a border area in the past, so the access was very limited during Communist times (only 6 kilometres to the Greek border). A small asphalt road goes through the gorge – the only connection between the village of Trigrad and the town of Devin. The road is cut into the rocky side of the gorge and reaches the village about 1,5 kilometres away of the gorge.

The gorge itself is 6-7 kilometres long. At its bottom flows Trigrad River, which high waters created the vertical walls of the gorge, between 100-300 meters high, millions of years ago. At the foot of the highest cliffs of the gorge is the artificial entrance of Devil’s Throat Cave – the most popular tourist destination in the area. 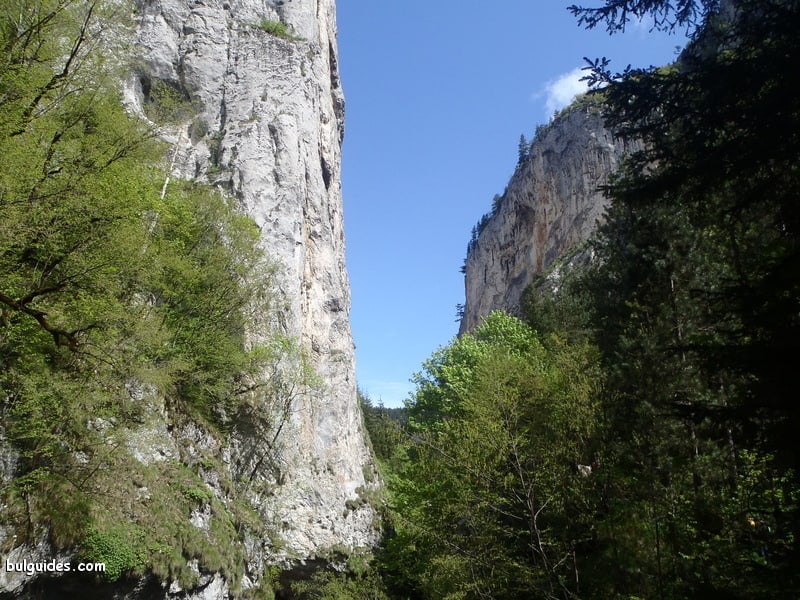 Devil’s Throat is famous with the 42 meters high underground waterfall inside it. An artificial tunnel leads to the so called Noisy Hall, where the waters of Trigrad River drop down through the natural entrance of the cave. The hall itself is impressive with its size. Waters of the river disappear through some small cracks inside the hall and flow as a karst spring on the surface again 500 metres away, at the bottom of the gorge.

The cave is open for visitors every day between 10 a.m. and 5.30 p.m. Every half an hour there is a guided walk (Entrance fee 4BGN per adult in 2013). The walk takes about 20-25 minutes, 10 of them climbing steep stairs near the waterfall to go out through the natural entrance of the cave.

There is a few other impressive caves in the area (actually these are more than 200 in total). Most famous is Haramiiska Cave, accessible only by using special equipment. Some of the caves were inhabited thousands of years ago which is proven by the artifacts found inside – clay pots and iron instruments. Another impressive cave is Yagodinska (Jagodinska) Cave, located near the village of Yagodina.

The gorge and cave are also interesting as habitats for some flora and fauna species. Most famous is a small bird, called Wallcreeper, which nests into the vertical cliffs of the gorge. The cave is the biggest shelter for the bats in the area. Because of the constant temperature inside(about 8 degrees) thousands of them choose to hibernate inside the cave during winter period. On the rocks around can be seen a beautiful flower, symbol of the Rhodopes – Silivryak (Haberlea Rhodopensis). The whole area is inhabited by brown bears, dears, wild boars, hairs, foxes…

There is different sorts of accommodation in the village of Trigrad – many small guest houses and a few hotels, also a few shops and restaurants. Its interesting to see a mosque and an Ortodox church next to each other in the centre of the village. Such mixture in religions is common for the whole area of Rhodopes, where Muslims and Christians live together peacefully.

Its never too hot here is summer because of the elevation – about 1200 meters above sea level. In winter sometimes there is heavy snow cover, but in general the area is accessible and visited all the year round, with peak tourist season in July and August.

The area is considered as one of the most beautiful in Rhodopes, with numerous options for hiking, mountain bike and horse riding routes. Most popular walking routes are from Trigrad to the village of Yagodina (2,5 hours); Trigrad – Chairite Lakes – village of Mugla – Lednicata Hut (8-9 hours), Trigrad – Vodni Pad Village. 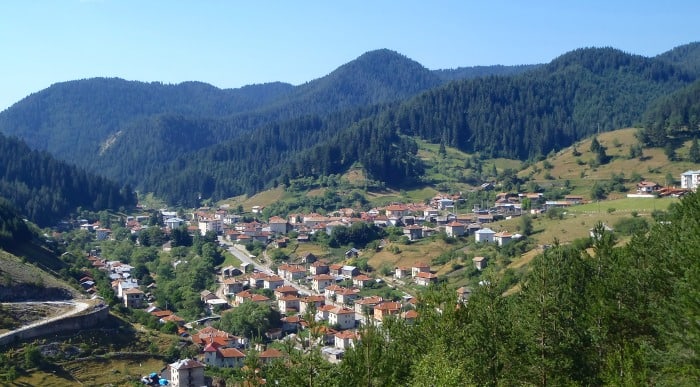 The village of Trigrad