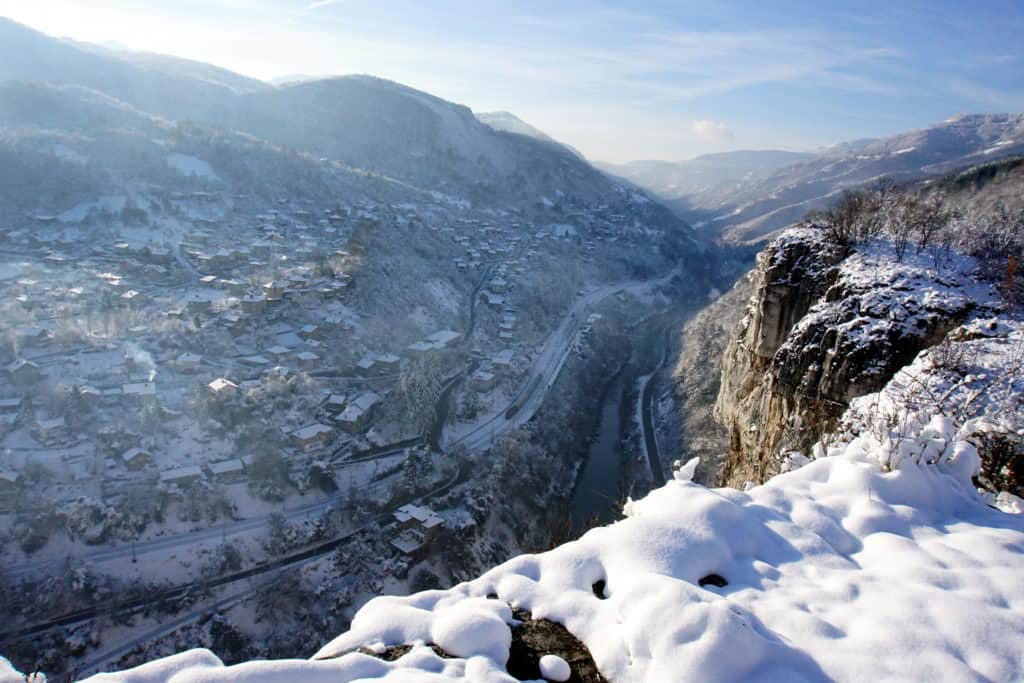 It is well – known to everyone that the water is life and all of the civilizations build their towns near rivers exactly because of this fact. The largest entirely Bulgarian river, named Iskar River, is a bright example for this. It kept traces for the miracles created by the nature and the people till nowadays. The river takes its source from Rila Mountains, the highest in Bulgaria and in the Balkans. All along its riversides there are many intriguing and picturesque places which are worth seeing but the most amazing of all is the Iskar Gorge, the wonderful canyon where the river crosses the Stara Planina Mountains or more commonly known as the Balkan (the peninsula of the same name is called after the mountain).

The whole length of the defile is around 150 km but the most magnificent part of it is amid the town of Novi Iskar (17 km away from Sofia) and the village of Lyutibrod. This 67 km are checkered with outstanding scenery and different kind of attractions which can draw the attention even of the most fastidious tourists. The gorge delineates the movement of the incredibly attractive railroad which connects Sofia and Gorna Oryahovitsa. Travelling with train is one of the most efficacious ways to examine this unique nature creation but if you want to discover more you need to literally stain your hands.

Hiking, mountain biking, climbing and many others mountain activities can be practiced in this area. Of course there are a lot of tourist trails but the most famous one is named after the patriarch of the Bulgarian literature – Ivan Vazov. He was fascinated by the nature and the peace around and loved to come back in this place where he created many of his works dedicated to Bulgarian people.

This one day route is perfect for the weekend. It begins at Zasele Village (around 60 km away from Sofia) and ends at the railway station of Bov Village – or if you want you can switch the destinations and start your journey from Bov. This wonderful walking route is the only one which leads to the magnificent waterfall, named Skaklya. There are signboards and marking everywhere so it is impossible to get lost. The path from Bov to the waterfall is easy and passing under the crown of the trees. The wide green glade on the riverside is a perfect place for picnic and especially to pitch a tent. After Skaklya, the route starts to rise and the passage becomes a little heavier but not so much. The perfect time for visiting is in the spring when the water is more and the waterfall becomes larger.

Other, less known walking trail begins also from Bov railway station and ends there. The route is taking around 3 hours and it is very easy and get-at-able. We can call it the water path because it passes on the Bov River. The centuries-old interaction between the rocks and the water has created a wonderful fairy-tale of waterfalls with different shapes and size. The most majestic jewel in this water crown is Pod Kamiko (Under the stone) Waterfall, the highest one.

If you are interested in rock climbing, the Rocks of Lakatnik will become your favorite place. The name comes from the curve which Iskar River makes near Lakatnik railway station and it is in the shape of elbow (lakat in Bulgarian). Imposing, upright flanks rose up in 600 m and leads right to the swift-flowing overfalls of the river. This is one of the places connected to the times when the alpinism in Bulgaria got stated – first students learned how to climb on the rocks of Lakatnik. When you turn your eyes up to the magnificent rocks you will see a little red shelter, built directly upon the rocks, 300 m above the river. Its name is “The Eagle Nest” and it can be reached only with climbing from the top of the eminence. Except with scrambling you can reach the highest place walking through a tiny track. Spring is the most suitable period for this hiking route because of the nice cool weather. You will discern the end of the track when you reach a monument dedicated to the heroes died in one of the many uprisings in Bulgaria. Take a look around and let all your senses to become absorbed in the breathtaking nature around.

Another common group around is that of the speleologists because the area is full of caves, most of which are not recommended for regular tourists. The most famous of all is The Dark Hole (Temna dupka) Cave, maybe because its enter looks like a giant black hole in the rocks. It’s around 5 km long but not the entire inside is explored. It is very important to stick rigidly to the walks which are adapted to visiting because there is a whole labyrinth underground (around 9 km long) and there is good chance to get lost. Inside the cave you will find different kind of ponds and even a river which flows in the most famous karst spring in this area, called Zhitolub (located near the main road). Right next to the spring is the beginning of the path which leads to the cave.

The out of reach uplands near Iskar River appears a perfect place for the construction of many cloisters, most famous of which are the Cherepish Monastery and the Seven Altars Monastery. If you are a fan of the pilgrim tourism this is the right place for you.

There are so many superb and intriguing places around, made by the humans and created by the Nature and every step of discovering it will be pure pleasure.