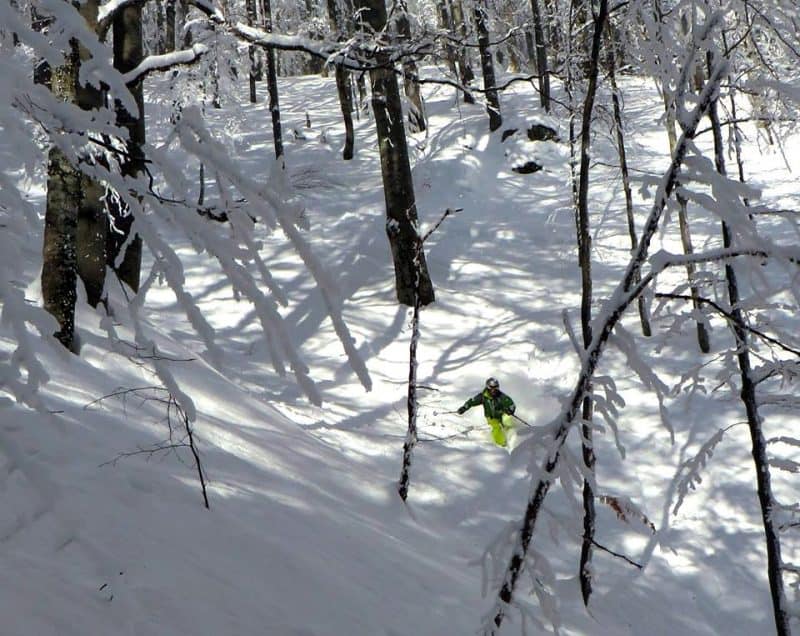 *Update 21th of Feb: Please read our original report below to get an idea about the conditions until 11th of Feb. 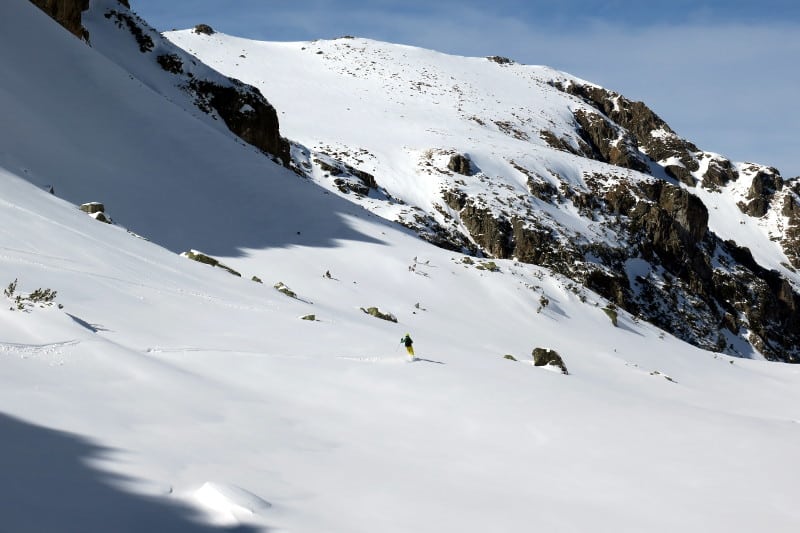 A short warming after 12th of Feb transformed some of the great snow we had for a few days into crust, but still nice powder to be found on some aspects. Dry and sunny weather again, than another good (new 20-30cm) snowfall on 19th – this is a brief story of the last week. Moderate winds the days after the snowfall and significant snow transportation because of that. Similar situation was observed on Vitosha and Rila mountains last days – high avalanche risk with spontaneous avalanches on wind loaded steep slopes with N, NE, NW exposure. Low risk below the tree line. The specific risks of the generally thin cover with weak layers at the base is still valid, so is the problem with uncovered (or only masked) hard objects like stones and bushes. Another period of warming is ahead with no forecast for significant snowfalls.

*Update 11th of Feb: Please read our original report below to get an idea about the conditions until 8th of Feb. 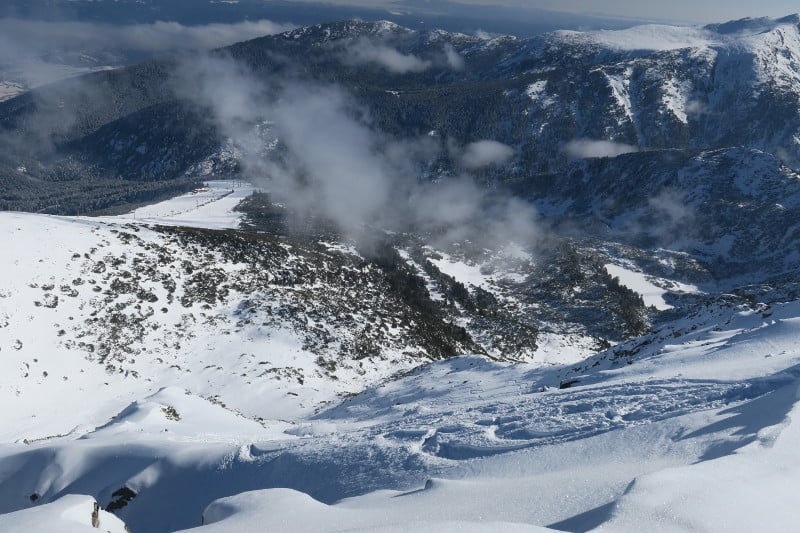 A few bluebird days followed the last snowfalls, combined with very good snow conditions in Rila and Pirin mountains. The last snowfall depth appears to be 10 to 30 cm in the different ranges, the snow is still powder on most aspects (excluding the south-facing exposures, where crust started to form). Recent avalanche activity on slopes with N-NE-NW aspect – large deep slabs propagated near rocks mainly and on wind loaded slopes. Still some stone sharks and pine-bushes not properly covered, but great riding generally. 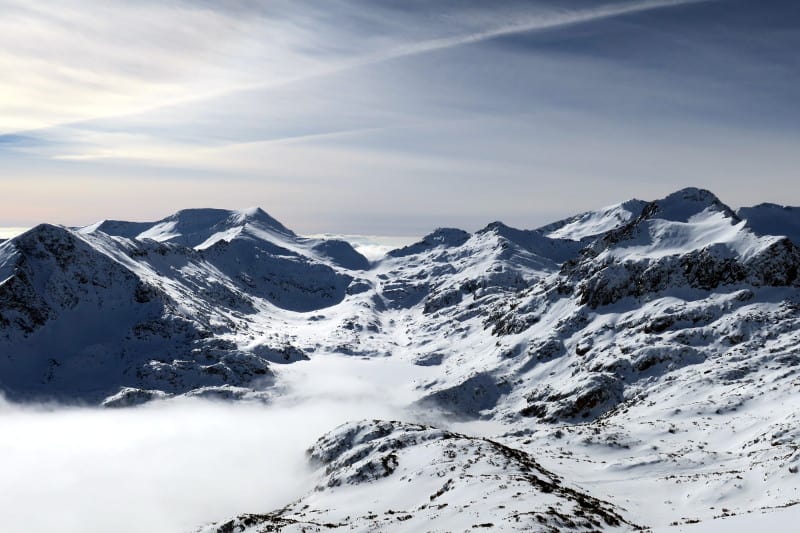 *Update 8th of Feb: Please read our original report below to get an idea about the conditions until 4th of Feb (Saturday).

The period 4th-8th of Feb was generally warm, humid, with some moderate to strong winds up the mountains and a couple of snowfalls. Unfortunately raining down the valleys and up to 1200-1600 m.

It started showering in the regions of Rila and Pirin in Saturday at lunch time, but was actually rain down the valleys. The warming of the weather caused avalanche activity, on various elevations, mainly in the lower parts of the mountains and on wind loaded slopes (E,NE,N). Spontaneous avalanches of wet, heavy snow were reported on Vitosha, Rila and Pirin mountain ranges, both below and above the tree line.

Another snowfall brought about 20 cm of new snow in Rila Mountain range on Monday night, around 10-15 in Pirin Mountains. It was slightly heavy powder, which become heavier during the day with the rising of the temperatures and because of the cloud cover and humidity. The new layer was also generally unstable, slipping on steeper slopes, quickly got very sticky in the lower parts.  Great fun off-piste in the morning and at higher elevations in the resorts of Borovets and Bansko. 8th of Feb promises sunny weather and lowering temperatures for the next days.

Alert to the skiers in Bansko area: the local mountain rescue team already had their first calls from riders stuck in the areas of the so called Chashata (The Bowl), also known as Echmishte area, located within the resort, and the area of the Demyanitsa coulours, east from the ski area.  Both areas are easily accessible from the ski runs – the Plato, Bunderitsa and N10 and (especially Demyanitsa) may become traps where unexperienced skiers get in to complicated and avalanche prone terrain with no chance to go back. The rescue services visit these areas regularly, no matter there are signs for the potential risk. On top of that, the insurance, included in your ski pass, does not cover rescue outside the ski runs and you`ll have to cover the expenses for that.

*Please read the original report below. 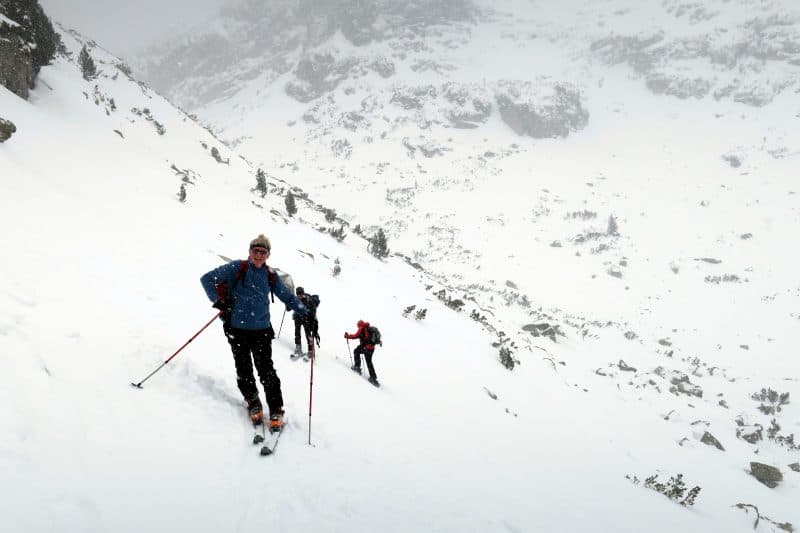 After the last significant snowfalls all over Bulgaria in the period 18-19th of Jan, we had a long period of cold, sunny, calm and dry weather. Constant temperatures below zero, sunny days up the mountains and foggy down the valleys in early mornings. A great time to get your crampons and ice axe and go to explore the peaks of the high ranges, not so great for ski touring and freeriding.

It appears the regions that received most snow during the last falls were the mountain ranges of Vitosha, Balkan Mountains and the Rhodopes – apart from Vitosha, these are not the most popular ski touring and off-piste destinations in Bulgaria. The new recent “secret spot” of the riders from Sofia are the broad-leaf forests of Petrohan area. Petrohan is a mountain pass in Western Balkan Mountains, the road through it connects the capital Sofia and the towns of Montana and Berkovitsa to the north. The pass is located at around 1400 m above the sea, sometimes in winter closed due to avalanches, but generally lacks snow for good riding.

Vitosha Mountains, located next to Sofia, also offered good conditions – some of the favorite ski descents there start from the top of the mountains – Mount Cherni Vruh (2290 m) and finish in the villages of Dragalevtsi, Simeonovo, Zheleznitsa, Bistritsa (actually suburbs of Sofia) at about 1000 m.a.s.l. Rhodope Mountains received a good amount of snow and skiing and ski touring in their deep forests near the ski resort of Pamporovo reported to be great. 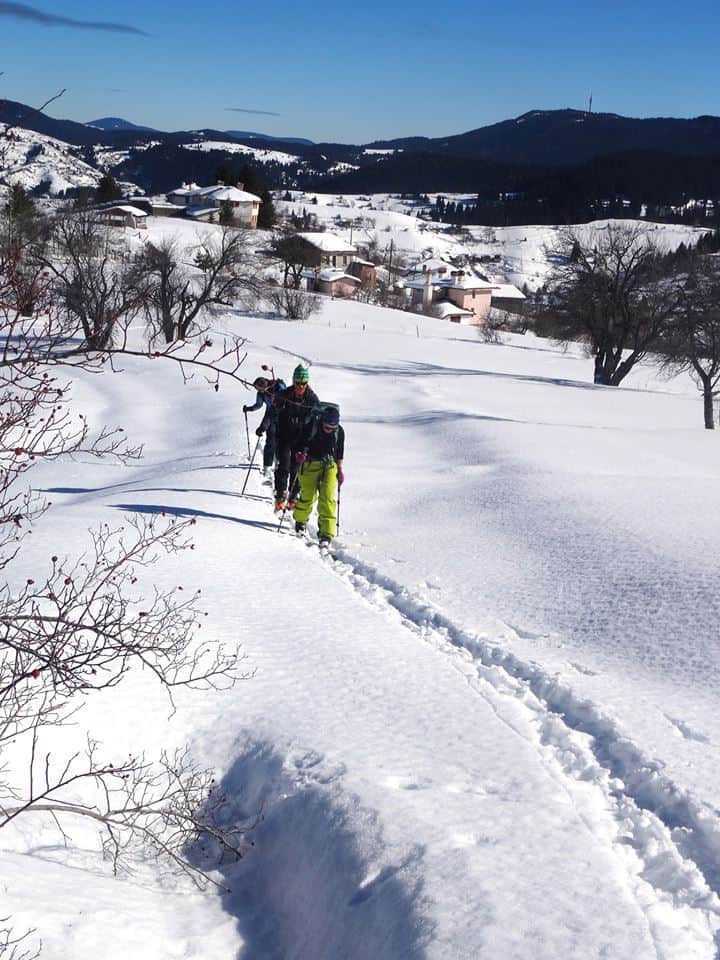 Ski touring above the village of Gela (1500 m.a.s.l.), Western Rhodopes, towards the highest mountain range of Perelik. The TV tower of Snezhanka and the ski resport of Pamporovo in a far distance. Photo: Boris Vlaev.

Recently not so great  touring and off-piste conditions in the traditional destinations – the mountain ranges of Rila and Pirin. The snow is generally less than in Northern Bulgaria, not enough to cover all the vegetation (especially in Pirin) and greatly varies – from cool powder in some shady forests (still preserved because of the constant low temperatures), to crust on the south aspects and hard packed, wind formed snow on top of the mountains. On top of that, most of the snow was completely blown away from the mountain ridges and it is still partly insufficient in elevations up to approximately 1600-1800 m, below the tree line, on the northern component aspects. Completely missing on some south and west facing slopes. 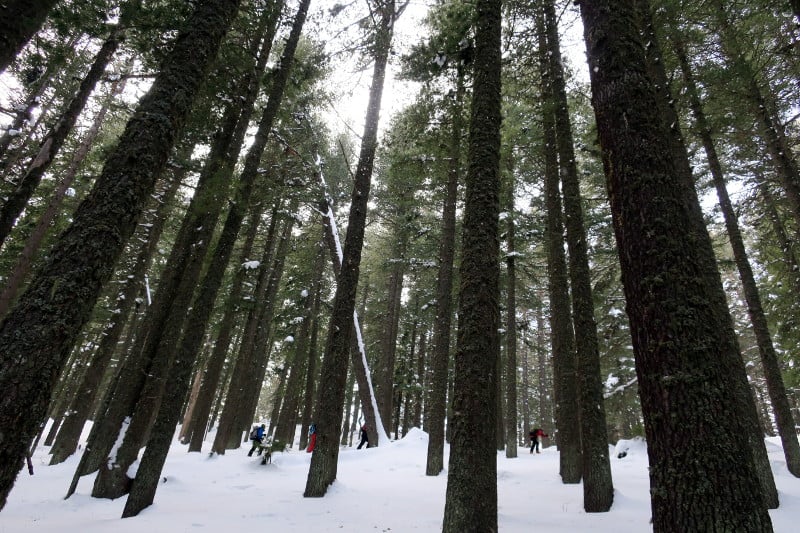 The deep forests of Rila National Park. These conifer “pilons” keep good shade for the snow.

The best conditions were to be found in some forests near the tree line, also somewhere in the mid parts of the mountain slopes – between 1900-2500 m on the N and NE aspects,  where the snow was blown into the valleys, gullies and the couloirs by the W component winds and kept shady and cool. You could ride down to 1400 on the north aspects but with attention because of the thin snow pack and still not completely buried obstacles (routes, stones) below. Same situation close to the ridges above 2500. 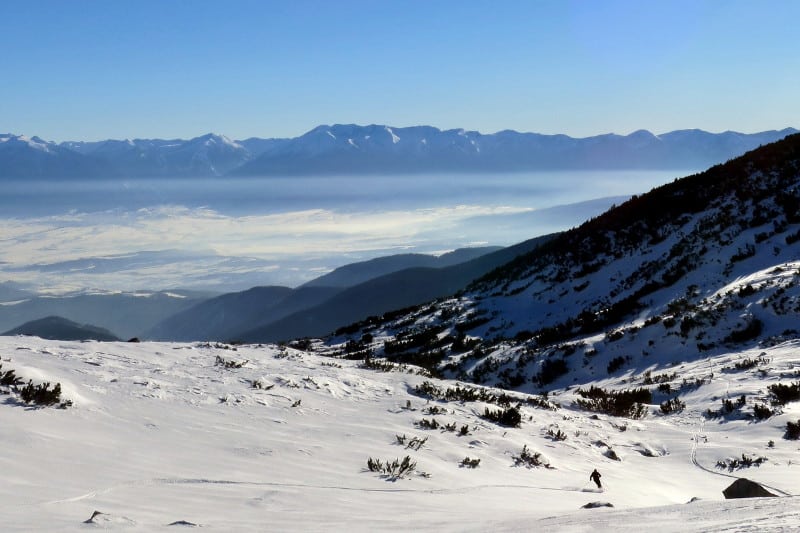 Skiing down a S facing valley in Rila Mountains, 27th of Jan (Pirin Mountains seen as background). Some fresh snow blown down at the bottom of the valley and good conditions into the forests below.

The avalanche situation – things settled down generally, with trouble free in terms of avalanches skiing on all aspects recently. There are two main warnings to be considered: 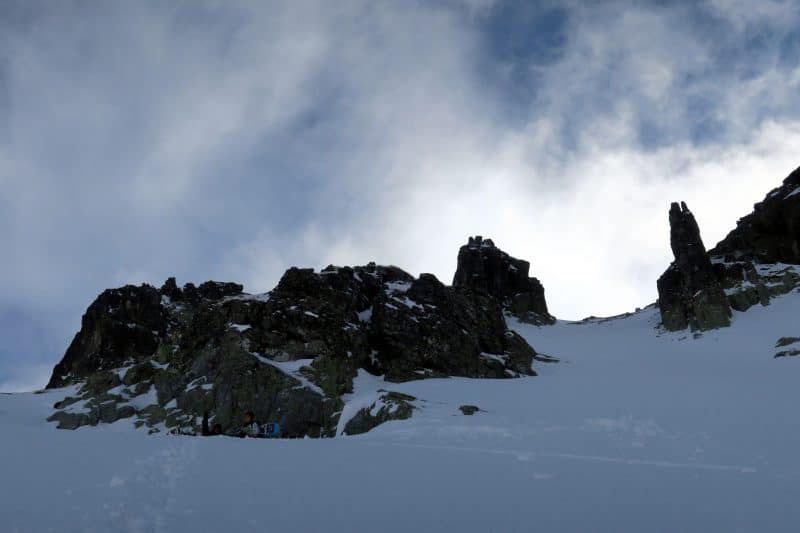 The entry of the couloir of the Nameless Peak, Malyovitsa area, 1th of Feb. The transition area between the ridge and the snow in the couloir is clearly visible. 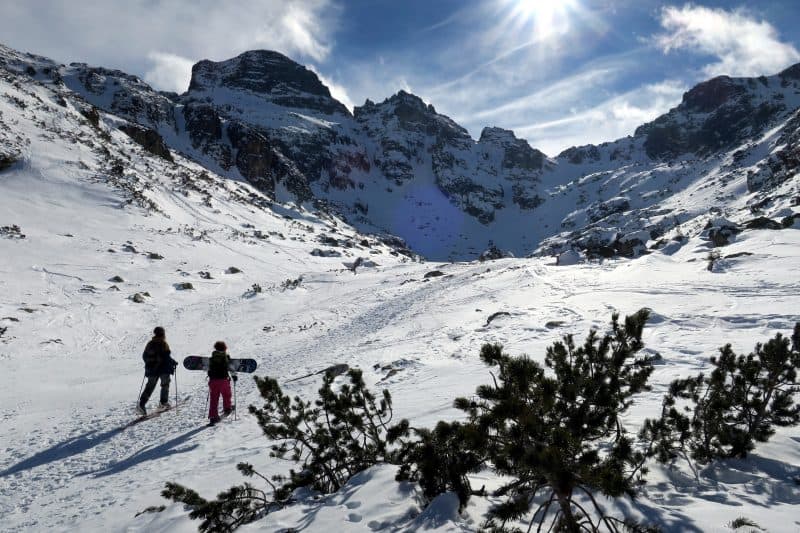 The valley of Malyovitsa, 1th of Feb. Not enough snow generally, good powder in the couloirs of Orlovetz and Petlite peaks (most were skied previous days).

The weather forecast doesn`t look very good in terms of skiing – raising of the temperatures is predicted on the next days and possible small amounts of new snow after 4th of Feb.

Conclusion for the next days: The upcoming warming may bring better spring type conditions for riding on some slopes (no matter its not Spring here yet), where the crust is quite thick already or there is hard wind blown pack, but may also weaken the snow layers on some other exposures, causing avalanche activity. Finding good snow is a difficult task now, at least in Rila and Pirin mountain ranges, but the weather is nice and sunny, great for wandering in the mountains and enjoying nice panoramas:) 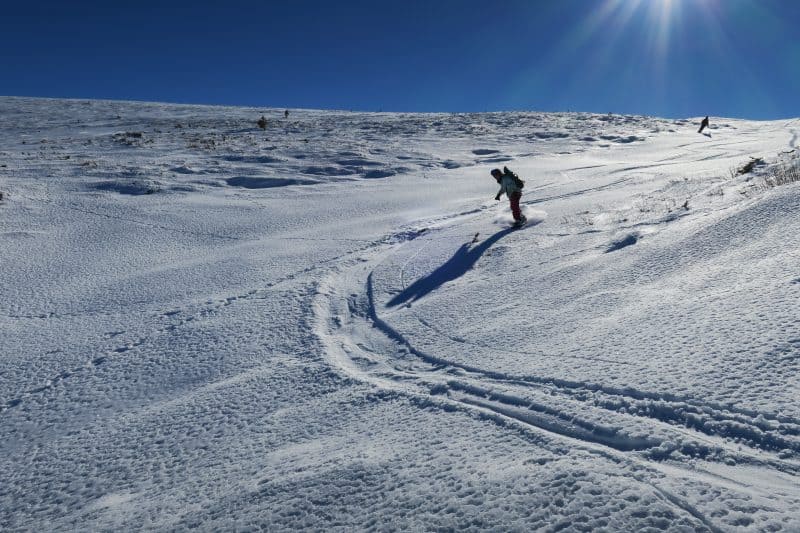 Nice (in some parts) spring conditions on the slopes of Mount Kabul, Rila Mountains, 31th of Jan

Disclaimer:  this is an overview of the snow conditions in the mountains of Bulgaria for a certain period, written with the idea to only give a wide concept and trends. The exact conditions vary day-by-day and what you`ll find may significantly differ from the described in this report. The avalanche situation greatly varies depending on many factors, so use the given report just as a piece of info, part of the overview you`ll evidence in the current mountain range when you visit.