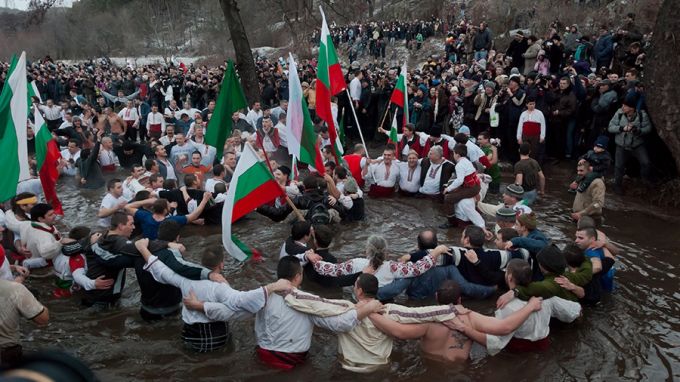 One of the unique Bulgarian traditions is the Epiphany male water dance. Among the places where it is held every year is the town of Kalofer located in the foot of Balkan Mountains. The local men jump and dance into the freezing cold waters of Tundza River. Accompanied by bagpipes, the participants perform the traditional horo dance. The date is 6th of January, the feast day of Epiphany, also called Yordanovden in Orthodox Bulgaria in honour of the baptism of Jesus in the waters of Jordan River.

Other rituals during the celebrations of Epiphany across the country involve a priest throwing a wooden cross in a river (or a lake or the sea) and the men jumping into the waters to get it. It is considered that the person that will reach the cross first will be healthy during the coming year. On the eve of Epiphany the local mayor gathers all the men from the village in order to prepare them for the next mornings’ event. A liturgy is usually served in all churches on the day of Epiphany.

In the town of Kalofer the celebrations coincidence with the birthday of the most famous inhabitant of this town – Hristo Botev – a Bulgarian national hero, revolutionary, who fought against the Ottoman Empire to liberate the country, and also one of the classical Bulgarian authors, most popular with his poetry.