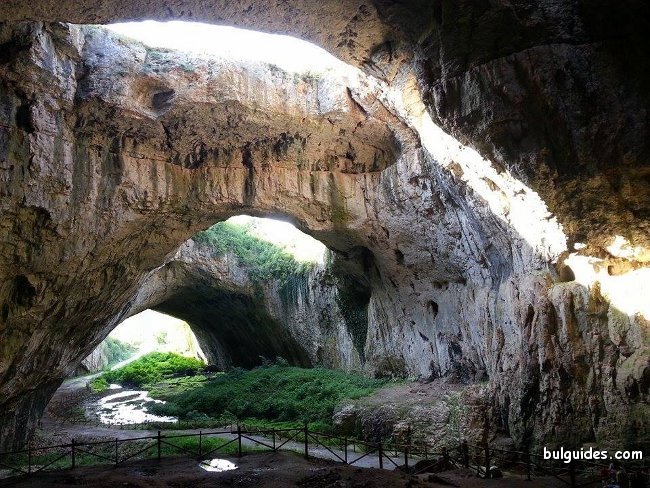 The Devetàshka cave (Devetàshka peshterà as it is pronounced in Bulgarian) is a picturesque karst cave near Veliko Tarnovo, a beautiful historical city in central Bulgaria. Also known as Oknata, this unique cave consists of an enormous open chamber illuminated by seven holes in the ceiling. Unlike other caves Devetàshka is very well lit and its floor is covered by lush greenery, especially in spring and summer, so sometimes it is hard to believe that one is actually underground. There are 11 underground lakes as well as a small river that runs through the cave and then connects with a bigger one outside called Osam. The lush vegetation and the high humidity create a pleasant microclimate in the cave, and one easily gets the feeling of being somewhere in the tropical region.

With a length of nearly 2.5 km, a height of 60 m and a total surface of about 20,400 m², Devetàshka is one of the biggest caves in Bulgaria although only a small part is accessible to regular tourists. It is home to more than 35,000 bats of 15 different species, as well as other protected species such as snakes, frogs, turtles and birds. In order to protect the wildlife visitors are asked to respect certain rules when entering the cave, and during their breeding period in June and July the cave is closed for tourists.

The Devetàshka cave is one of the three most important hibernation spots for bats in Europe. All bats are protected species in Bulgaria, and four of the species that can be found in Devetàshka are also included in the IUCN Red List of Threatened Species. However, in 2011 a large number of bats were displaced from the cave during the shooting of Hollywood action film The Expendables 2. Although by late 2012 most of the bats had returned, the shooting was opposed by local environmentalists and was later declared a breach of local environmental regulations by the Supreme Administrative Court of Bulgaria.

According to archaeologists, Devetàshka was inhabited in prehistoric times, as early as 70,000 BC. It was used as food storage and shelter as it offered very good conditions with its spacious chamber, soft climate and running water. In the 1950s the cave was used by the Bulgarian Army as a warehouse where big oil barrels were stored. However, this was only temporary and afterwards it became one of Bulgaria’s main landmarks, along with the Krushunski Waterfalls just a few kilometres away.

In order to reach Devetàshka cave the nearest bigger city is Veliko Tarnovo, but one can easily get to Lovech, another yet smaller historical town. There are some 13 km from Lovech to the village of Devetaki, and another 2 km to the cave. From the village there is a narrow path which follows the Osam river and can take you to Devetàshka, or you could also take the main Road 301 and a smaller dirt road for about 500 m. A small fee is charged to visitors and the collected money is used to help maintain the cave and its surroundings.