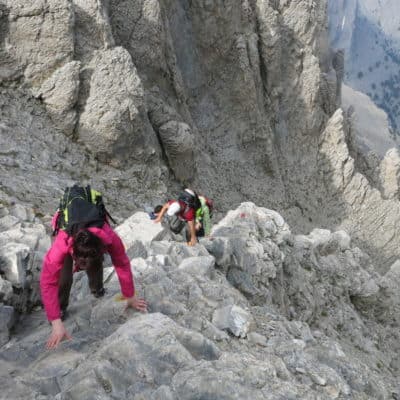 How difficult is it to climb Mount Mytikas in Olympus Mountains, Greece is a question we are asked quite often, both from people who plan to take a guided ascent or a self-guided trip. With its 2917 meters above the sea, Mytikas is the second highest mountain on the Balkan Peninsula, but for many undoubtedly it is the most spectacular to climb in the area. This is due to the unique nature of the mountain landscapes of the range, the proximity to the sea, the background of legends and myths, connected to this mountain, and not least – because of the nature of the ascent, which is far from a trivial walk. 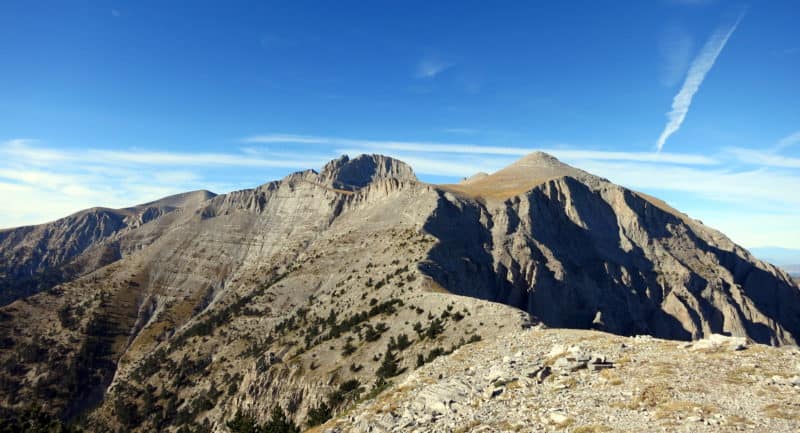 The most popular ascent route starts at around 1100 meters above the sea, at the Prionia area, located 20 km from the village of Litochoro, which is only another 5 km from the Aegean Sea coast. Walking up to the famous Olympus Mountain Refuge A (2100 m) and further to Scala Peak (2866 m) is not problematic – a large marked walking trail. You gain around 1800 m of elevation and although the trail is fairly steep at some parts, nothing more than a physical stamina is required. The last short stretch to the peak takes around 1h each way to complete – a quick decent of Scala, then traverse, ascent of the so called Kakoscala (The Evil Stairs) and final traverse/ascent of the ridge towards the peak point. The scrambling is easy (up to grade 3 UIAA climbing), but exposed – that means if you fall fatal injuries or death are likely to occur.

The other popular route coming from the Mouson (Musses) Plateau via the Louki Couloir is similar – a bit shorter and steeper, but about the same difficulty grade. There is an additional risk of rockfalls along the Louki route, especially during Spring and early Summer – quite often these could be caused by unexperienced climbers above you. So don`t forget your helmet if you climb Louki! 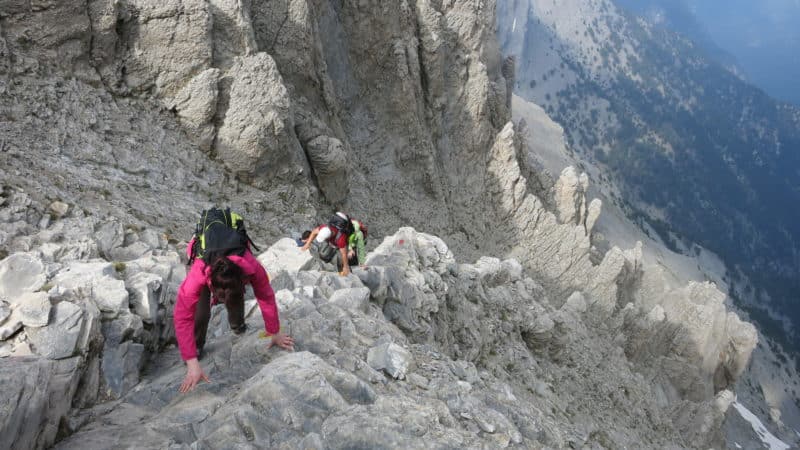 A good detailed description of the routes up to Mytikas is given in this blog post.

The question “How difficult is the peak” is tricky to answer as the peak could be relatively easy to reach, but it could also be a trap for the inexperienced mountaineers. In summer, many local and foreign tourists, with or without proper knowledge and equipment, attempt it, some of them underestimating the risk. Those who do not suffer from a serious fear of heights and empty spaces and are brave enough to touch the rocks of the final part of the ascent, would make it to the top and enjoy the achievement and the airy panoramas. Of course the good weather and dry conditions are a must for such success. In wet conditions – rain or snow, if the rocks are slippery, the risk of fatal fall is increasing and belaying is highly recommended. Underestimating the risk of fall and the possible rockfalls caused the death of several hikers in the past years. 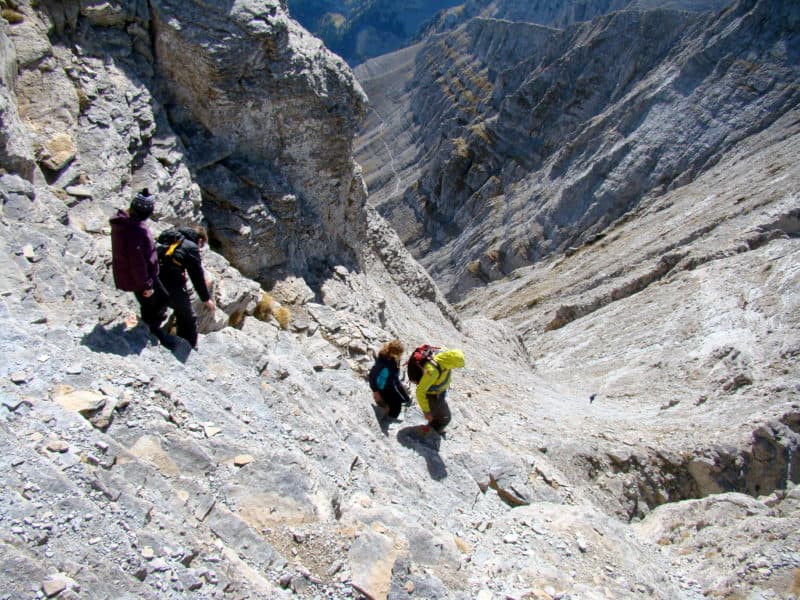 There are a few key attributes for a successful ascent – physical stamina, confidence in using your hands for balance when scrambling rocks and lack of serious fear of heights, which may paralyze your brain and body half way. You don`t need any special climbing ability or training. Along with that, if you don`t want to rely on your luck only, you should be prepared to change plans if weather changes or use belaying equipment for the ascent and descent if the terrain condition requires it. There are belaying anchors (bolts) placed along the route. And finally keep in mind that the other climbers could be not less dangerous for you than the lightnings of Zeus.

Mt. Olympus with children – taking kids up the mountain always means that you take the full responsibility on their safety as they don`t always understand the risks and the need to be concentrated at certain passages, they have less fears than the adults too. Children taken up to Mount Mytikas should be closely supervised by an experienced adult and properly secured at the last section Scala-Mytikas, in order to avoid any possible accidents. 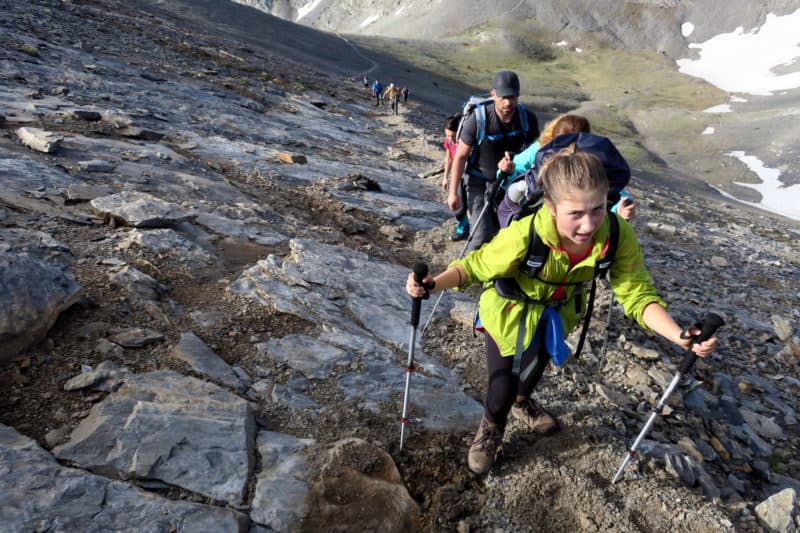 The climbing season in summer conditions is June to October. In June, depending on the conditions of the current year,  you may expect to encounter some snow drifts along the so called Zonaria traversing trail – on the way from the Mouson Plateau to the Louki-Mytikas route.  The trail is cutting the whole massif of Mytikas and Stefani peaks and is crossing some steep couloirs  above Refuge A and the valley. If there is snow the Mouson Plateau approach route and the Zonaria trail are not recommended without good stiff boots to cut steps and possible belaying on the exposed sections if the snow is too firm. The Refuge A – Scala – Mytikas route is recommended during this time of the year if you are not prepared to deal with the snow.  Lightning storms are more possible in the early summer, while cold weather and even some snowfalls are possible in September/October. 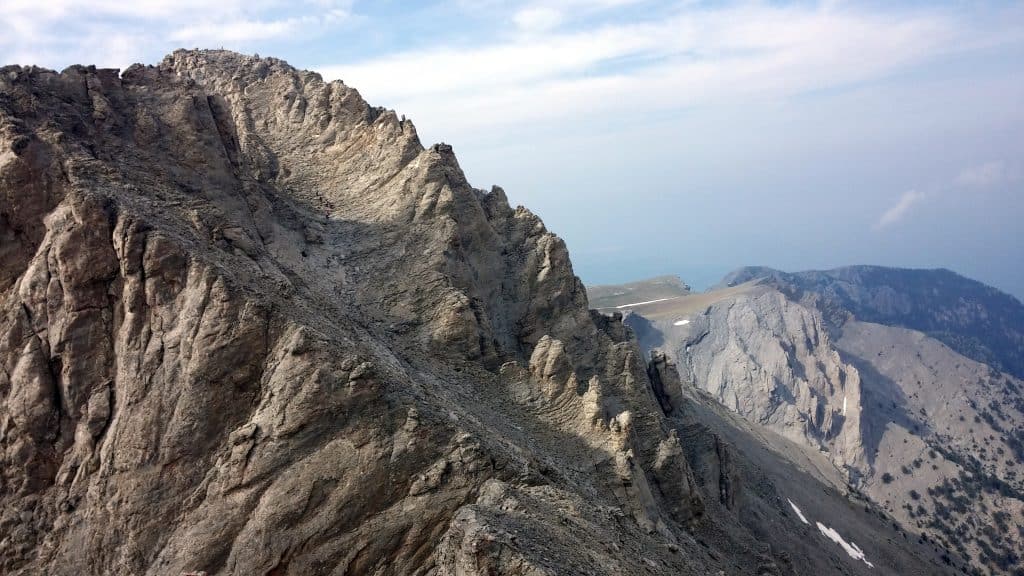 Of course on the first place climbing Mytikas is great fun and a rewarding achievement for every walker. Dipping into the Mediterranean Sea waters at the end of the ascent day is one of the best “mountain” experiences you may have:) The beauty of the mountain is not only in the jagged peaks at the top, but also in the old forests and deep valleys below, so a 3-day trek is a better option than a quick 2-day ascent. Please check our 3-day guided itinerary for climbing Mount Mytikas in Greece  which includes the famous Mouson Plateau as well. 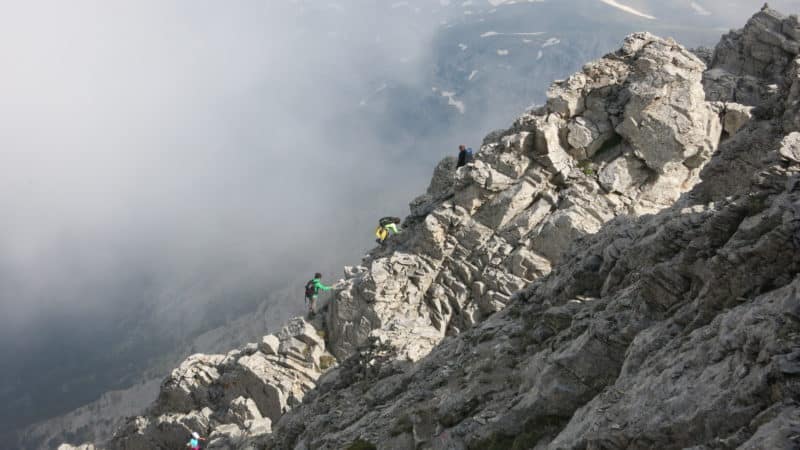