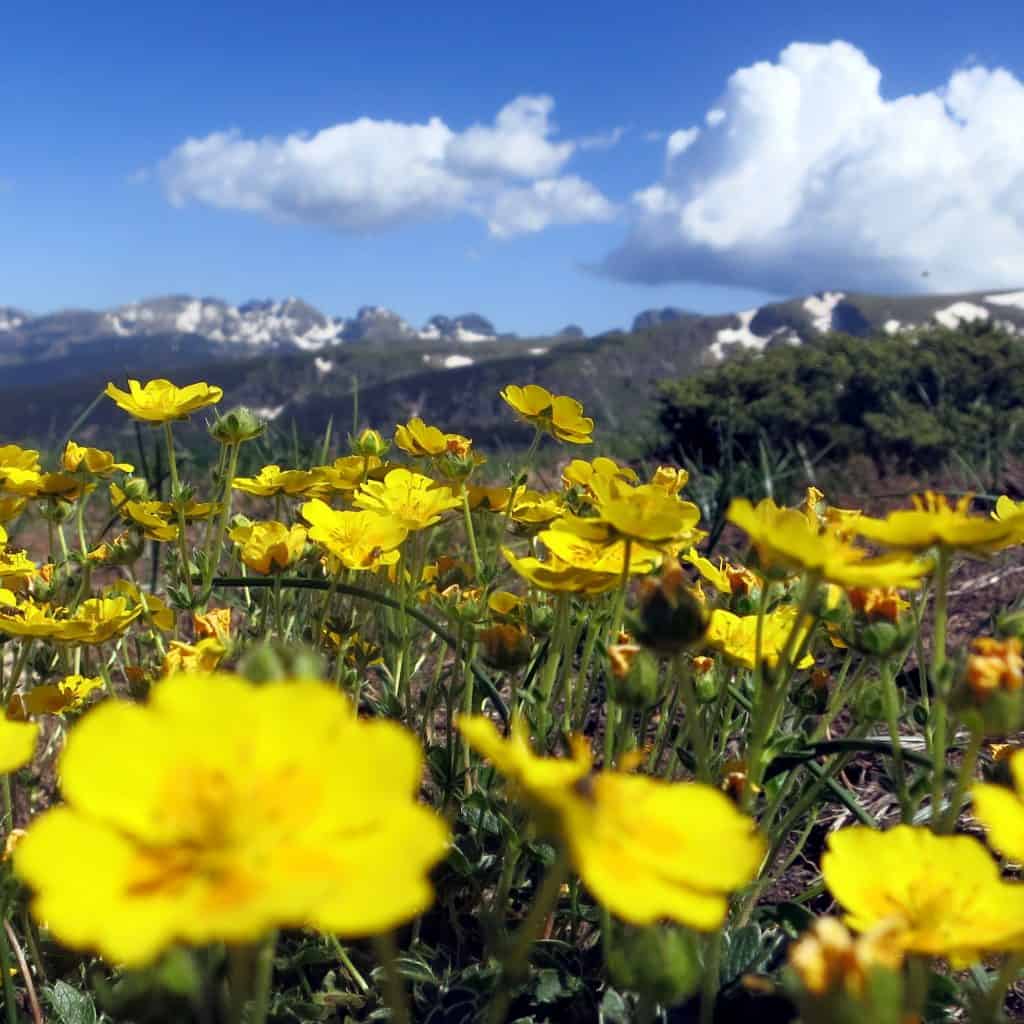 Spring! That`s the time you can go skiing up the mountain in the morning and then have a swim and a sun bath at the nearby outdoor pool. The days are getting longer, the sun is feeling stronger and the temperatures during the day are rising. For the people who don’t leave the cities,  in April the winter is already forgotten and the time for a seaside holiday is approaching. But those who love the mountains are looking forward to that period, when the snow is giving space to the green grass and blossoming flowers in the higher parts of Balkan, Rila and Pirin mountain ranges. 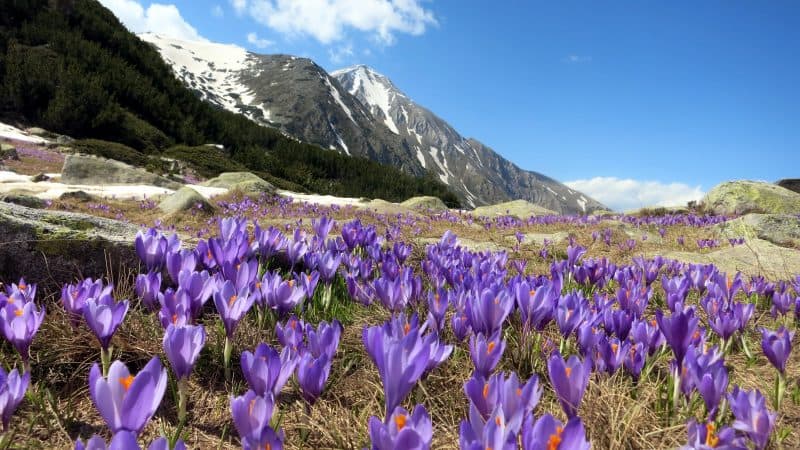 Pirin Mountains in late May

It is good to be prepared on what conditions to expect when planning a hiking trip in the mountains of Bulgaria during the Spring months – April, May and June. It might be just a day trip or a week-long hut-to-hut trekking itinerary. Of  course, the conditions vary from year to year as well as depend on the current mountain range and the average altitudes you plan to hike on. For example, you may expect to find good hiking conditions in the Rhodopes in late April, but if you want to visit Rila and Pirin during this time, better take your skis or snowshoes.

Here is a brief description on the weather and terrain specifics for the different mountain regions of Bulgaria during Spring time:

April – while April is a good time to go hiking in the lower Rhodopes, it is still considered as a winter time above 2000-2200 m. The rainfalls in the valleys are usually appearing as snowfalls up there, the temperatures drop down significantly during the night and the snow is not really melting so much. The spring melt-freeze cycle of the snow means that you may expect firm snow and ice in the mornings and slush in the afternoons. Your crampons and ice axe will get handy on some of the routes. The cooler temperatures are great to go hiking or mountain biking in the lower mountains (Eastern and lower Western Rhodopes, Strandza Mountains), which sometimes get unpleasantly hot in July/August. You may expect temperatures in the range of 0 to 20C. 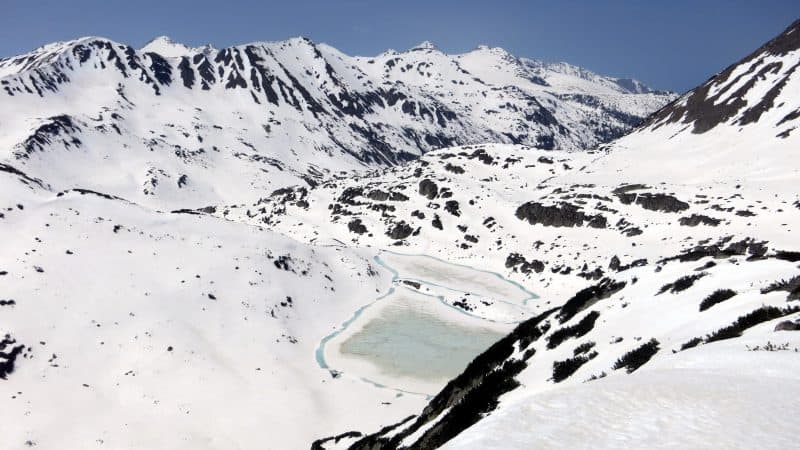 Pirin Mountains on 4th of May 2015 – it was a snowy winter and there is still quite a lot of it up the mountains, actually perfect time for ski touring. But the weather is quite hot already and in two weeks the scenery will change completely… 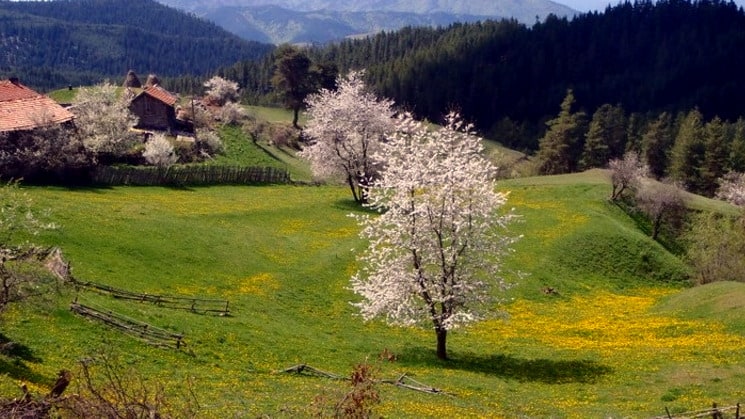 Spring in the Rhodopes – mid April

May – In May the weather is getting warmer, the rivers are full of water from the melting snow and down in the valleys the temperatures might go up to 30C. Despite that, the weather in the mountains is variable, with periods of rainy days (sometimes a few in a row). There still might be snowfalls above 2200-2400 m and even lower occasionally. Lightning storms are also possible in May – short, but intense. 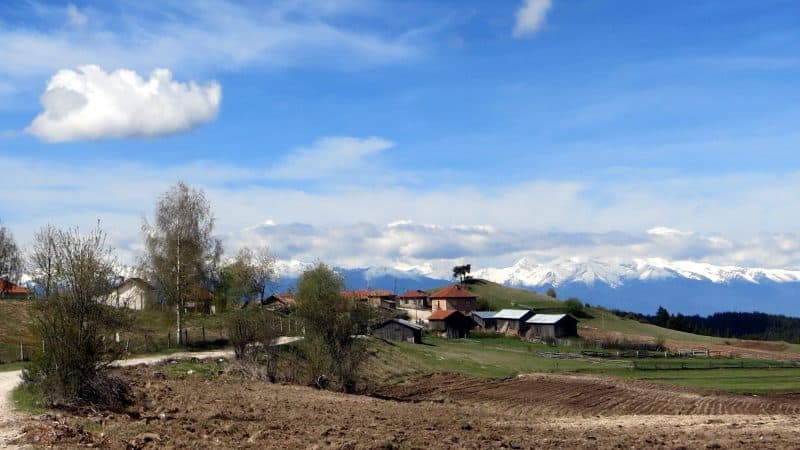 Zlataritsa Village, Western Rhodope Mountains, about 1600 m asl, 1th of May (The Labour Day). The locals are already hard working on the fields, while the Pirin Mountains on the background are still all in white.

While the Rhodopes are already fully accessible, certain trails in Rila, Pirin and the Balkan, will still be blocked by large sections of snow and dangerous to cross without special equipment. This will change by the end of the month, when the mountains get their “Dalmatian” cover and only occasional snow drifts will remain until late June. This is traditionally the time to organize tours to some of the impressive waterfalls in the mountains – Rayskoto Pruskalo in Balkan Mountains, or Skakavitsa Waterfall in Rila, as they are in their most powerful condition because of the melted snow. The temperature range is between 5-20C. 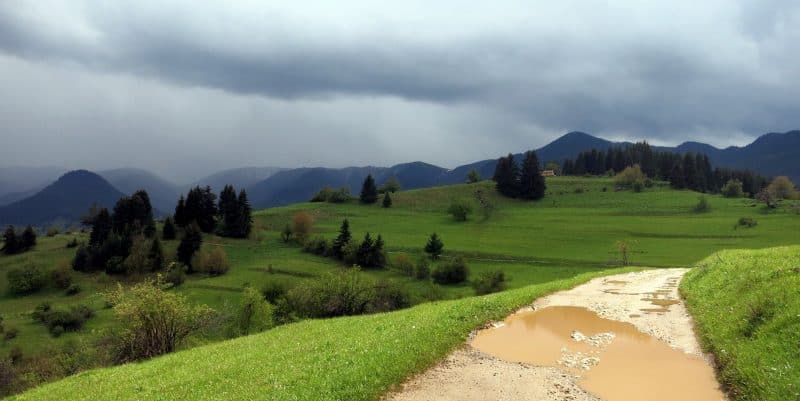 Mid-May: Western Rhodopes near Gela Village. Its raining there and sunny here… the trails are muddy, but there is no snow remained.

June – June is probably the best of the spring months to go hiking – the weather is warm enough, even during the night, everything is green and blossoming at height, and there are only a few snow spots remained. But keep in mind that these could be quite dangerous – nearly every year there are occasions of people slipping (sometimes to death) while trying to cross a short snow drift in trainers. The lightning storms are common, especially in the afternoons. Don’t forget to take warm clothes as the weather might suddenly change to cold. You’ll meet very few people on the trails, which is not the case in July and August. The temperatures could be anything between 5 to 25C. 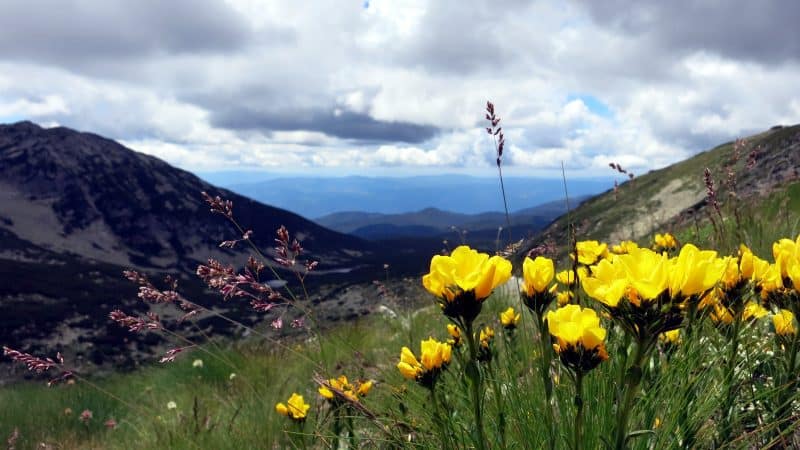 Pirin Mountains in June – warm weather, fewer people on the trails, but the atmosphere might be unstable.

The terrain conditions: the terrain might be muddy and slippery because of the rains, but also because of the snow drifts that did not melt yet. Some trails are notorious to keep snow until late Spring and crossing these sections without special equipment is an unnecessary risk. This is mainly valid for higher altitudes and shady exposures.

The facilities – most huts are open, but its always a good idea to contact in advance, especially if visiting during the week. Most lifts start running from the beginning of June.

The equipment – unless you plan to approach some of the more exposed (in showy conditions) routes and there is still permanent snow up the mountains, ordinary summer hiking boots are fine in this period, assuming they are warm, waterproof and cover your ankle. Take it seriously with your wind and water protection – a good jacket with hood, rain cover and possibly a pair of gaiters are important. Get enough warm clothes – a light down jacket is always useful, at least for the evenings in the huts. Warm hat and warm gloves are a must. 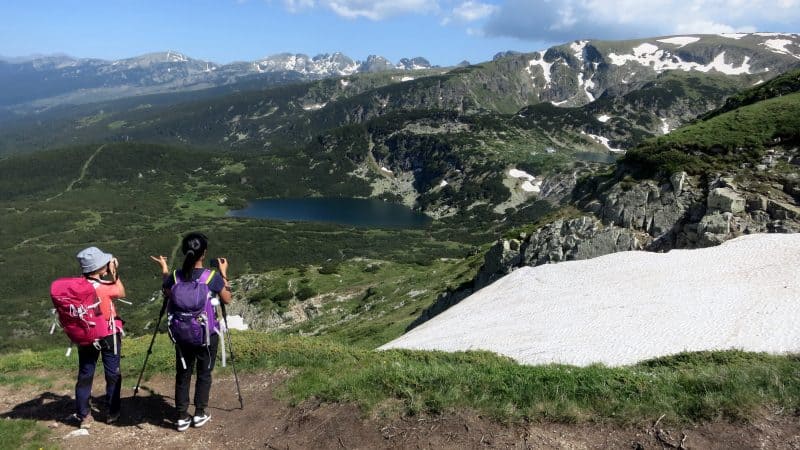 Risks, associated with this period of the year: there are a couple of threats to take seriously:

Tips for planning your walking trip in April, May or June:

If you are still wondering how to organize your trip and which mountain and route are suitable for you, contact us.