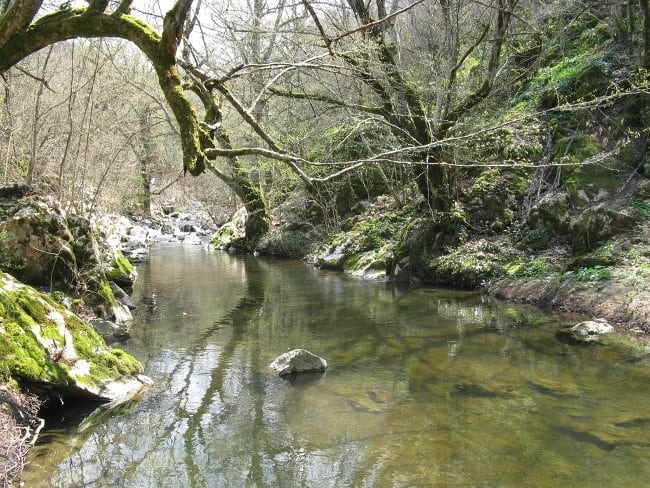 There is a theory or maybe we can call it a legend, regarding to which there is only one place which has survived after Ice Age and that place is Strandzha Mountains (Странджа), situated in the southeast of Bulgaria. In corroboration of what I said is the presence of the representatives of the flora and the fauna, which are unique and can be seen only in this area. The brightest example is the Strandzha Flower, named Pontic Rhododendron (зеленика).

Strandzha is one of the less known and  visited mountains in Bulgaria. That is why the nature is saved pure and most of the secrets of the mountain are still hidden. It is a border mountain and the greater part of it is located on the territory of Turkey, one of the south neighbors of Bulgaria. The limited access is the main reason for the preservation of this nonpareil piece of nature. In 1995 very large part of the territory is officially proclaimed as Nature Park and it includes five reserves – Vitanovo (Витаново), Sredoka (Средока), Silkosiya (Силкосия), Uzunbudzhak (Узунбуджак) and Tisovitsa (Тисовица).

In Vitanovo we can find different kind of oak trees which are a hundred years old, like Blagun, Tser and Gorun. Here is the place where, if you are lucky, may spot a deer and hind. Long time ago these woods were populated by bears but nowadays only the name of this fascinating animal is saved in some toponyms, as the river Bear Glen or in the area Bear Meadows. You can visit this reserve only after obtaining a permission and following a definite route, so keep that in mind if you decide to hike here. Sredoka is located in the middle between Silkosiya and Vitanovo. The access here is much tightened too and can be seen very small part of this beautiful breezy woods and plant endemics like the Red Pyracantha, Cherry Laurel and other species. The most southern reserve is the Uzunbudzhak and it is on the border with Turkey. Here is the larger field of Pontic Rhododendron (Странджанска зеленика). The fauna world is richer than in the other reserves, there are wolves, deers, wild-boars, wild cat, jackal and long time ago, a lynx, but no more. There are many different kinds of reptiles – snakes and lizards. Tisovitsa is practically inaccessible and it is very hard to get there. Except the unique and wild nature, there are found traces of the anciant Thracian tribes.  In Silkosiya the access is limited to a several eco trails and only with companion. The wild nature will meet you here too but the specific for this reserve is the great diversity of birds. You can hear the song of the nightingale, the jay, the oriole and many more.

Above the whole territory of the mountain and up to the all Black sea coasts, passes one of the most important bird migration routes, well-known as Via Pontica. Millions of birds, large part of it threatened with extinction, are flying from Africa to make nests and posterity. The walking among the green old woods, secret meadows and hidden places is very tempting and a good idea but if you decide to discover the protected part of Strandzha, you need to check your routes and coordinate it with the administration of the Nature Park.

The best place to see all the protected flora species in Strandzha, which is allowed and easy to be reached, is Marina River (Марина река) eco trail, on the border with the reserve Silkosiya. It is situated in 4 km from village of Bulgari (famous with the fire-dancers), where you will see a signboard on the right side of the road and there you need to leave the car and take the old cart-track, just a kilometer long and a perfect opportunity for a  short hike. After this short walk you will find yourself at the age of Tertiary, which is the age after the dying of the dinosaurs. Under the open sky, which hardly can be seen because of the tree arch above, there are desk and board, just like in school, where you can get your free lesson right from the living Nature and meet species survived the Ice Age. Thanks to the relief and the climate, the woods are kept safe, just like in the real museum. The eco trail is easy and suitable for children too.

The history of this mystic mountain is not very well discovered. It is known that there are traces of life from the Age of Neolith to the very new history of Bulgaria. There are many relics from the Thracian civilization and particularly from the time of the Odrysian Kingdom, compounded by many Thracian tribes. There are mounds, necropolises and sanctuaries left from this age and many myths about large treasure of gold hidden in mountain’s womb. Maybe that is the reason for the great number of treasure-hunters in this area. The most remarkable monument of the Thracian culture is located in the area, called Mouse field (Мишкова нива), 4 km away from the town of Malko Tarnovo. There is a whole complex, saved to our times, which includes fortress and mines, roman villa and two tombs. At the entrance of sanctuary, the archaeologists found stone slab, which represents two open arms, an arrow and a shield, the meaning of it is not found yet. Other legend says that near Mouse field, in area named the Saddler (Седлото), in a hidden cave, there is a tomb of the Egyptian goddess Basted. Regarding the rumours everyone who dares to disturb the peace of the ancient goddess will be overtaken by fearsome consequences. If you want to visit the place you need a special permission from the border police.