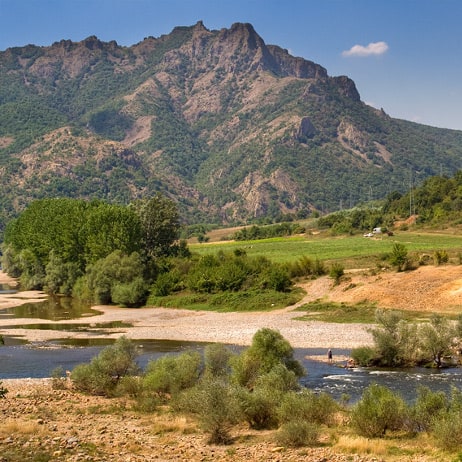 The lovely town of Madzharovo is located in the Eastern Rhodope Mountains, near the Arda River. It is around 60 km away from the two largest towns in the area – Haskovo and Ivaylovgrad. The village is named after one of the bravest revolutionary and fighter for its liberation – Dimitar Madzharov. In the past, the town was a mining town and today there still can be seen enthusiasts rush in search of golden sand along the Arda River. In Madzharovo you can see historical-ethnographic exhibition, which presents the traditions and history of the Thracian population from the Eastern Rhodopes and the culture of the inhabitants of Aegean Thrace, whose descendants are the modern inhabitants of the region. The exhibition contains both archaeological finds from the area, and elements of the modern history of the city, with models of mining galleries, fossil and minerals.

About 10 km northeast of Madzharovo is situated the village of Borislavtsi and the area between the two settlements is one of the most popular destinations for ornithological tourism in the country. The area includes part of the narrow valley of the Arda River, surrounded by mountain slopes and rocks. The unique microclimate and diverse relief are the reason for the wealth of bird species that are found here. There have been around 180 bird species, of which 40 are included in the Red Book of Bulgaria (list of the endangered or threatened flora and fauna species in the country). In the area there are five globally threatened bird species during hibernation, migration or during the nesting period and the lesser kestrel (Falco Naumanni) still nests here. One of the two colonies of Griffon Vultures (Gyps Fulvus) in Bulgaria is located on the rock complexes along Arda River, in the reserve “Valchi Dol”. An Environmental Protection Visitor Center is established in the town of Madzarovo. It offers various services to the people who came to see the home of the vultures. It works for the conservation of the nature in the region and is a regional structure of the Bulgarian Society for the Protection of Birds. In the building of this center you can visit the unique for the Balkans, interactive exhibition about the life of the vultures. Under the guise of games, there are presented the main moments in the life of the heavenly rulers of the Eastern Rhodope Mountains. Every visitor has the opportunity to hear fascinating lecture at the showroom and see the vultures live in the wild.

The place where you can see the vultures in their natural environment is the protected area, named Kovan Kaya. This place, however is not only the home of the birds, it is also one of the most mystical places in Bulgaria. The protected area is one of the largest rocks with Thracian niches in the country. Translated, the name Kovan Kaya means – the rock-hive because of the type of the massif, with great numbers of holes in it. The niches are more than one hundred. At a first glance, the vertical scale is riddled completely without order and logic. Who knows, however, the ancient Thracians probably had more complex divine system than we think. There is no unambiguous opinion on the question for what actually have been used the niches. According to one hypothesis they are used for rituals associated with the gods, worshipped by the Thracians and according to another – for burial chambers. 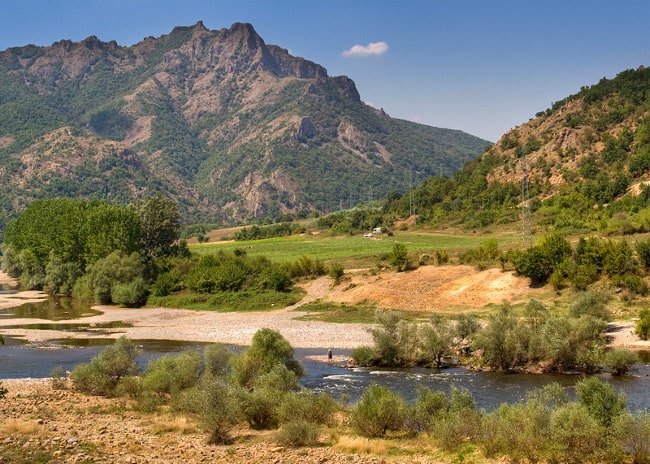 Kovan Kaya is not the only legacy left by the Thracians in this part of Bulgaria. Only 10 km away from Madzharovo one can reach the most famous cromlech complex in Bulgaria, known as the Bulgarian Stonehenge. The cromlech is an ancient religious facility built of large stone blocks arranged in a circle or several concentric circles that can reach up to a hundred meters in diameter. A walkway of about 500 meters and marked with signs, leads right there, at the top, where the ancient Thracians were probably committed important to them sacrifices or rituals. The archaeological studies of this sanctuary shows that it is built in the second phase of the Early Iron Age and was acting for a very long time – according to the found traces, religious rites were performed during the late Iron Age, and even in the Middle Ages. Surely there is kind of magic in this sacred Rhodope Mountains, which keeps the memory of ancient civilizations and hiding unique views and sensations.

Parts of the most beautiful wonders of the nature in the Eastern Rhodope Mountains are the meanders of Arda River. The meander is a curve of the river bed in the shape of a horseshoe formed by the action of a set of natural factors. Maybe the most impressive and easily accessible meanders are those near Madzharovo. It is believed that this place is a crater of a long extinct volcano, during which Arda has paved way, forming beautiful meanders. Madzharovo-Borislavtsi road that winds along the river is perhaps one of the most picturesques in Bulgaria.

The nature has been generous around – different tourist routes lead to amazing rock formations, like the Tower, Momina Skala, Sivridikme, Hisar, Patron Kaya, Okopa, Meneka. The landmark Okopa is famous with the fact that here was found the first early Christian sanctuary inhabited also by the ancient Thracians. Later in the same place was built the first early Christian church in the Rhodope Mountains. In the area of Hisar you can visit the chapel “St. Cyril and Methodius”, near which there is a spring with healing water. According to the legends it is known throughout the region for a long time ago. The same legends tell a story for the area “Momina skala”, towering over Madzharovo and named after the beautiful girl who jumped off the cliff to protect from encroachment her honor and dignity.