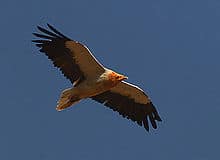 Four newborn Griffon Vultures (Gyps fulvus) has hatched in Eastern Rhodope Mountains in Bulgaria this spring. They were spotted by the team of the Bulgarian-Dutch Project „New Tracian Gold“, that works for a sustainable development of the region. A few dozens of couples are still incubating their eggs. The first couples of Egyptian Vultures (Neophron percnopterus) also came back in Eastern Rhodopes and started to prepare their nests.

Thousands of vultures inhabited Bulgaria in the past, but their number decreased drastically in the middle of twentieth century after the mass campaigns of poisoning the wolfs. The vultures are listed in the Bulgaria’s Red Book of endangered species. In the 80-Th’s of the last century, a couple of vultures turns back to Rhodopes. Thanks to the care of the environmentalists of BSPB (Bulgarian Society for the Protection of Birds) about forty couples of Griffon Vultures nest in the area today. Their colonies are located in the territory of a few protected areas along the Arda River bed.