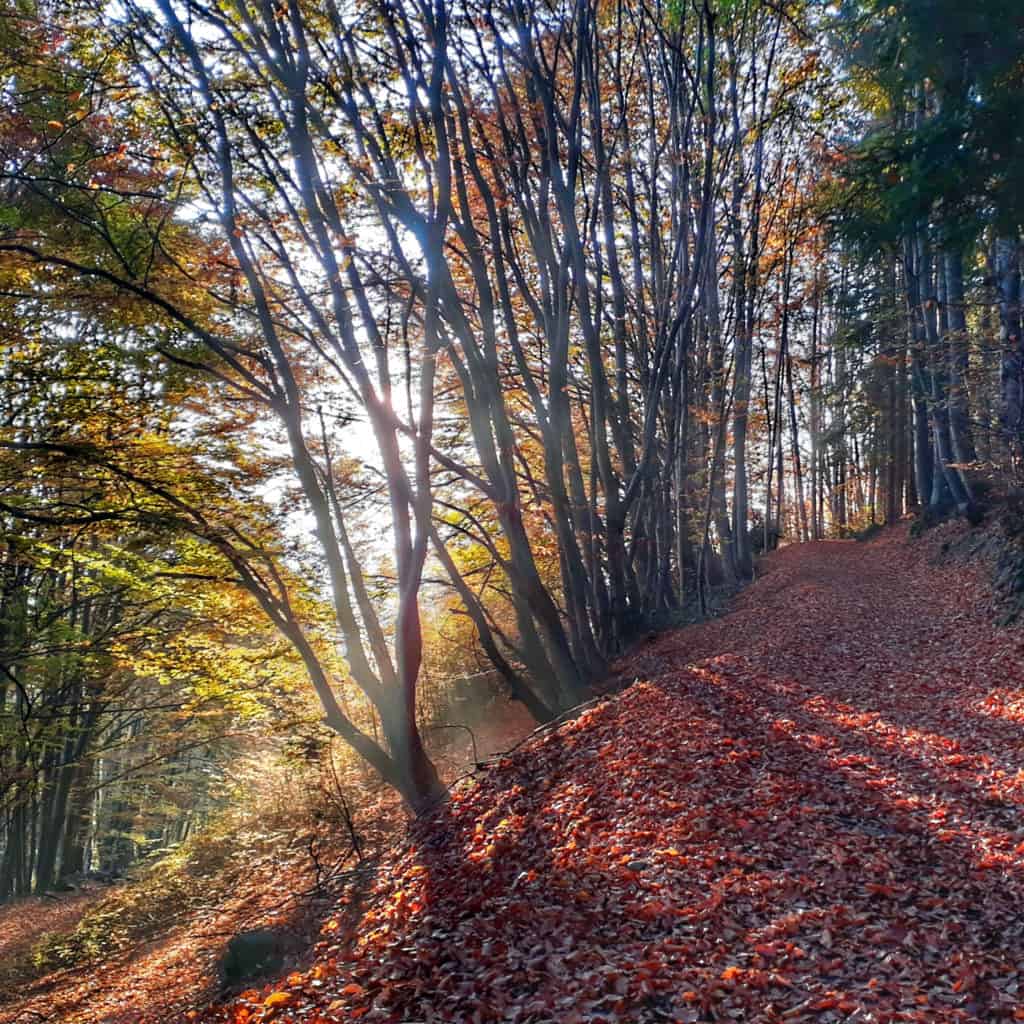 Sofia is maybe the only capital in Europe that is located at the foot of a big mountain and which allows such an easy access to the wild nature.The territory of Vitosha Mountains is proclaimed as a protected site, actually the oldest nature park on the Balkans, established 1934. Vitosha is the fourth highest mountain range in Bulgaria. It is situated next to Sofia, the capital of the country. Vitosha is the only dome-shaped mountain in the country. From geological point of view, it is a “young” mountain and there was no glacial activity forming the terrain. In the foothills of the mountain there are mineral and karst springs – in the neighborhoods of Pancharevo, Bosnek, Zheleznitsa, Rudartsi, Kniazhevo.

The dense network of paths makes Vitosha Mountains а natural choice for one-day hiking treks for those living in Sofia as well as for the visitors of the capital. The marked routes network was developed during the last century, with kind of a peak period during the Communist times, when many huts and governmental holiday properties were also built. Some of the buildings and trails are forgotten nowadays, but still the mountain is very well visited all the year round.

Vitosha Mountains are easily accessible from Sofia, either by public transport, taxi, or your own (rental) car.  There are many hiking routes for all levels, based on our experience we recommend you 4 of our loved ones day hikes. 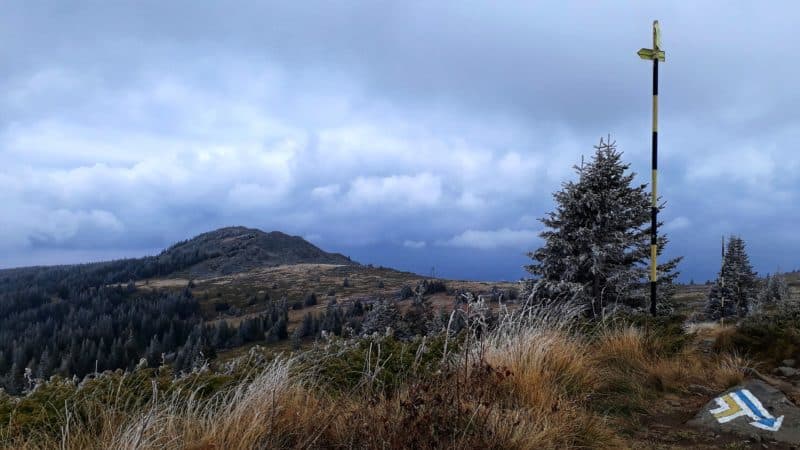 Though it might sound like a challenge with its respectable height of 2290 metres and its reputation for strong winds, Vitosha’s highpoint Cherni Vrah (The Black Peak) is in fact a very accessible summit. Because of its closeness to Sofia and the multitude of transport links and trails, Cherni Vrah is by far the most climbed mountain peak in Bulgaria, with tens of thousands of visitors each year. The meteorological station teavhouse on the summit reliably serves warm bean soup and cold beer might also be contributing to its popularity, keep in mind it’s open only during the weekends!

There are many climbing routes, but the most popular starts from Aleko Chalet (hizha Aleko, хижа Алеко). The hut is located at an altitude of 1810m. The easiest way to get there is by Simeonovski cable lift. You can reach the lift bottom station, located near the Sofia ring road, by taxi or buses №122 from the Zoo or №123 from the Cancer Hospital bus stop. The bus runs only during the weekends and official holidays.

The other way to get to Aleko hut is by taxi from the center of Sofia. It should cost you less than 30lv one way.

More info on the public transport options to reach Vitosha

Once you reach Aleko Hut, a very good red marked path, located on the steep slope just next to the chalet will lead you up and south to a gravel road. The markers actually show that this route is part of the E4 International Long Distance Route (more info here). Just follow the road, take a final shortcut, and after around 1,5 to 2 hours you’ll reach the top. Don’t forget to take water and sandwich with you and also to check the weather forecast – as due to its dome shape and location the mountain is quite often epicentre of storms. Furious winds, blizzards, thick fog and low temperatures are possible all the year round, so get well prepared in terms of equipment if you attend this hike.

Kamen Del (Камен дел, N42.61183 E23.27669) is a superb viewpoint above Sofia, super easy hike, making it ideal for a family walk in the mountain, less than 2 hours from Aleko Chalet. The peak is clearly visible from the main streets of Sofia and sometimes mistaken as the highest point of Vitosha. In order to climb it first you have to get to Aleko Hut, please check the description above.

When you exit Simeonovo cable lift, or get off from your car or taxi at the parking lot next to the lift station, you need to follow the path that goes south through the forest, towards the Vitosha Plateau and passes by the upper lift station of Dragalevtsi lift – Goli Vrah (Голи връх). Once you pass by it and exit the forest, the path will curve to the west, deviating from the trail towards Cherni Vruh. Follow the signs for Ushite Shelter (заслон Ушите, which is closed), located 500m before Kamen Del. The trail is marked with yellow and crosses the Peat Reserve (резерват Торфено бранище) from the east to the west going nearly flat and with a short ascent at the end. 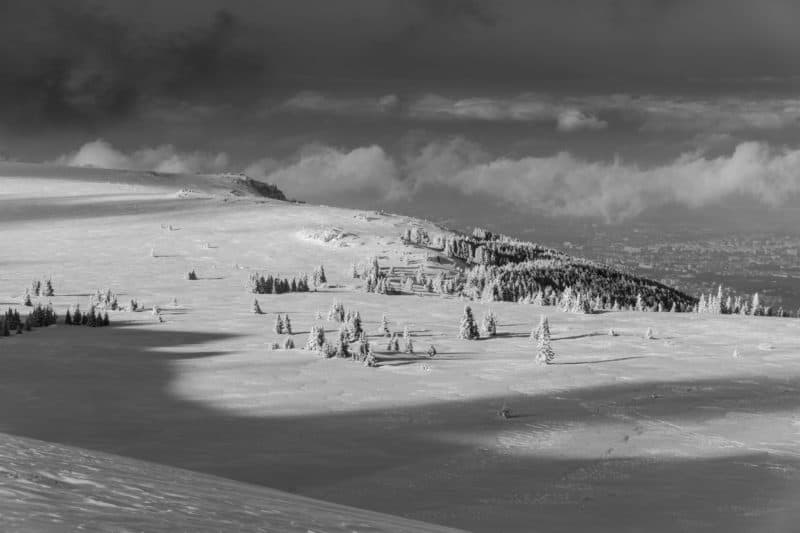 When you get to the shelter, you`ll see the rocky peak the Ushite (1906 m) on your left. After following the same main trail for another few hundred meters, take a smaller path to the right (north), in order to to get to Kamen Del – the rocky pile in the direction of Sofia. The last section requires to cross a small boulder field.

The Boyana Waterfall is considered the most beautiful and largest waterfall in Vitosha Mountains, especially in Spring when the melting snow feeds the river. Boyana river waters are falling from 25 meters when they reach this beautiful waterfall. At 1275 meters above sea level and close to Sofia, it’s one of the famous spots for ice climbing in the winter.

The Boyana Church is a Bulgarian Orthodox church situated on the outskirts of Sofia. In 1979, the building was added to the UNESCO Heritage List. It consists of three buildings. The eastern church was built in the 10th century, then enlarged at the beginning of the 13th century. The frescoes in this second church, painted in 1259, make it one of the most important collections of medieval paintings. The ensemble is completed by a third church, built at the beginning of the 19th century.

We recommend you a nice hike from Church to the waterfall. First you have to reach Boyana neighbourhood, a former village in the foot of Vitosha, which is nowadays a suburb of Sofia, by taxi or public transport, depending on your budget and free time.

By public transport: from Serdika Metro Station, take the blue line down south to Vitosha Metro Station. There, you can change to bus 64 and get off at Boyansko Hanche stop on the main square of Boyana district – a former small village that is currently a suburb of Sofia. The stop is right next to the restaurant of the same name and a 5-minute walk to Boyana Church. From the bus stop continue along “Belite brezi” street, just before “Pop Eustatius Vitoshki” street on the right corner you’ll see the Boyana Church yard wall.

To continue right along the  “Pop Eustatius Vitoshki” street, pass along the Boyana Power Station and leads to the forest at the upper side of the neighbourhood. At the beginning of the trail you will see the directional signs. This a link with the exact point in Google Maps.

The waterfall can be reached by two paths. Both are marked with guiding signs. One runs along the river, but it’s very steep and in many places there are difficult to cross sections. It will take you one hour to the waterfall, but we don’t recommend it to everyone, especially in wet or icy conditions.

The other path we prefer is marked with green colour, more sloping and gradually climbs, with some wonderful panoramic views. It passes near to the Boyana Lake. The climb to the waterfall along this trail takes an hour and a half. It passes through the only natural yew forest of Vitosha. 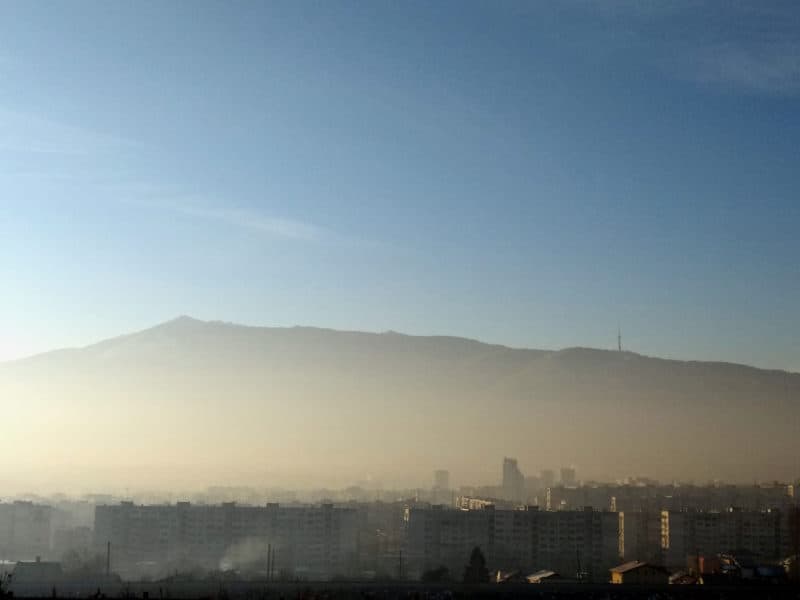 The Vitosha Mountain TV Tower (1345 m above the sea) is one of Sofia’s most recognizable landmarks due to its prominent position. The TV tower is affectionately called Kopitoto (Копитото) – “The Hoof” – by locals, because it was built on a rocky formation shaped like a hoof. Built in 1985, made of reinforced concrete with a decidedly Soviet aesthetic, Kopitoto has the strange feeling of looking both futuristic and like a blast from the past at the same time. There are several reasons why making the trip to Kopitoto TV tower is so worth it. The view of the city and the old chairlift, which stopped being operational in 1992 and has since been abandoned.

The easiest way to reach Kopitoto is by taxi. Taxis will take you to Kopitoto and back, but it will cost you a decent amount — I’d expect it’d cost about 50-60 lev (25-30 euro) round trip, including waiting time.

To get there by tram, you have to take Tram N5 to the end of the line (Knyazhevo neighbourhood). Several trails can take you up to the area of the TV tower, passing by Byalata Voda via Zlatnite Mostove and Momina Skala Hut or directly up to Kopitoto.  The ascent takes about 2-2,5 hours with roughly 700 m of vertical elevation gain. It is also possible to reach Kopitoto via Boyana district and Boyana Waterfall. A third option is to hike to Kopitoto from Bai Krustyo (Бай Кръстьо, the mid station of the chair lift of Dragalevtsi) via Kisish Shelter (Заслон Кикиш). Our best recommendation is to get a map of Vitosha in order to plan your route there.

When you reach the hoof-like Kopitoto (Копитото) outcrop and the capital city’s landmark TV tower, go through the abandoned lift station for a decent panorama of Sofia’s western districts. And if you’re craving some basic food and drink, the Momina Skala area with its huts and restaurants is not too far away, less than 30 min of walking south from the tower.

Read more about how to get to the Vitosha Mountains by public transport.