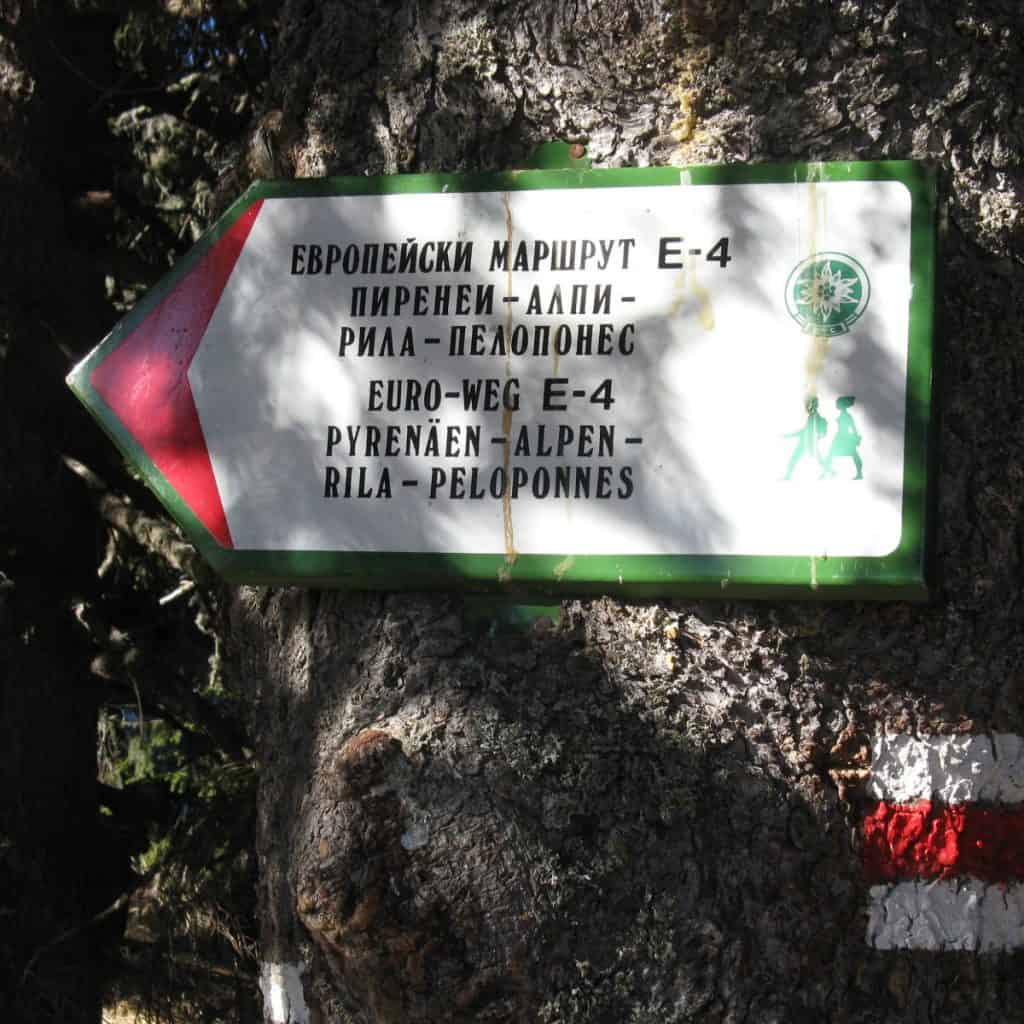 The European Ramblers Association (ERA) has developed a network of 12 long distance walking paths that cross most of the European countries. Following any of them is a long therm commitment as they cross hundreds of kilometres in each country, through remote areas, stunning national parks, rocky peaks, isolated villages, refuges and small towns. This, combined with the specifics in the culture and history of each different country on the way, makes the long distance walking through Europe a real adventure. A short description of the routes and a map is available on the ERA’s website.

Three of these routes cross the territory of Bulgaria – E3, E4 and E8 long distance paths.

Cape Emine and the Black Sea – the Eastern end of Balkan Mountains and the end of the Bulgarian part of E3 Route.

E3 starts at the Atlantic Ocean and is 6950 km long. The sections of the route pass through Spain, France, Luxembourg, Belgium, Germany, the Czech Republic, Slovakia, Poland, Hungary and Bulgaria.

The Bulgarian part of E3 route is 720 km long and follows the main ridge of Balkan Mountains from Mount Kom at the border with Serbia to the Black Sea coast – Cape Emine. It is actually the first and most popular long distance walking route in Bulgaria, simply known as “Kom-Emine”. Crossed for a first time in 1933, it become extremely popular during communist times, when large organized groups used to cross this route in summer. In this period it was known as part of the “Fellowship Route” between the countries from the ex-communist block. Most people manage to cross it for a period of 20-25 days.

Mount Kom is located in western Bulgaria, above the town of Berkovitsa. It is a 2016 meters high peak in Western Balkan Mountains. The most interesting part of the route is its middle section through Central Balkan National Park, including the highest point of the mountain – Mount Botev (2376 m.). Cape Emine is located about 50 km north of the town of Bugras and is the actual end of the Balkan Mountains chain.

In general the route is pretty well marked, with some exceptions in Eastern Balkan Mountains. About 30 mountain huts on the way provide accommodation and food. Best time to visit it is July-September, although it will be probably quite hot in the eastern parts of the mountains.

E4 is more than 10 000 kilometres long, starts from Spain and crosses France, Switzerland, Germany, Austria, Hungary, Romania, Bulgaria and Greece. It goes along the Greek island of Crete as well as Cyprus.

E4 covers five mountains in Bulgaria – Vitosha, Verila, Rila, Pirin and Slavyanka mountains. The beginning of the route is at Aleko Hut in Vitosha Mountains at 1810 meters elevation. Vitosha is located next to the capital of Bulgaria, Sofia, and is a very popular mountain range. Further the route crosses the less popular and lower mountain of Verila – a small chain that connects Vitosha to Rila Mountains, the highest on Balkan Peninsula.

The route follows some of the most interesting paths through Rila National Park to the saddle Predela that connects Rila and Pirin Mountains, than goes through Pirin National Park. Pirin is famous as the rockiest mountain in Bulgaria with some airy ridges like the famous Foal Ridge. After crossing Pirin National Park in Northern Pirin – the highest and most impressive part of Pirin Mountains with many glacier lakes and sharp peaks, the route crosses the medium and southern parts of Pirin and reaches Slavyanka Mountains – a 2212 meters high mountain range on the border between Bulgaria and Greece. Thats the end of the Bulgarian part of E4.

Some parts of the E4 route – through Vitosha, Rila and Pirin mountains follow some very popular hiking trails and are pretty well marked, with many huts on the way and plenty of info about the trails. The less popular parts of Verila, Slavyanka and middle and southern parts of Pirin Mountains might be a bit more problematic for the walkers. July-September is the best time to go to the highest parts of Rila and Pirin as there is still snow earlier, but its a bit hot in the lower parts as Verila and Southern Pirin.

E8 long distance route is about 4700 km long and goes from Ireland to Turkey. After Ireland it passes through the Irish Sea into the UK. After crossing the North Sea, it crosses the Netherlands, Germany, Austria, Slovakia, Poland, Ukraine and Romania and finally Bulgaria before reaching Turkey.

In Bulgaria E8 starts from the famous ski resort Borovets, goes through the highest mountains on the Balkans – Rila Mountains with Mount Musala (2925 meters) and further to Rhodope Mountains.

Rhodopes is the largest mountain range in Bulgaria, spread into the southern parts of the country from the second biggest city – Plovdiv – to the Greek border and from the valley of Razlog, where the three big mountains – Rila, Pirin and Rhodopes – “meet”, to the border with Turkey near Svilengrad.

Rhodopes are green and hilly, with many villages and small towns spread through their territory. Divided in two parts – Eastern and Western – with highest point Mount Perelik (2191 meters) located in the western parts, which are higher in general.

The route crosses Rila Mountains and goes into Rhodopes at Avramovi Kolibi Saddle, a pass that connects these two mountain ranges. Here is located the highest rail station on the Balkans at 1268 meters. Further it goes through some of the most interesting parts of Western Rhodopes – Yagodina and Trigrad Gorge, Perelik and further to Eastern Rhodopes to the village of Mezek near Svilengrad.

While some parts of the route in Rila and Western Rhodopes are well marked and visited, it is difficult to say that for the route in general. In some areas markings are literally non existing, in some others – duplicated with some local versions of the waymarks, different than the red and white coloured squares and E8 signs.

Best time to visit Rila Mountains is July-September, Rhodopes are nice to visit in spring and autumn as they are lower and average temperatures are higher than in the higher mountain ranges.