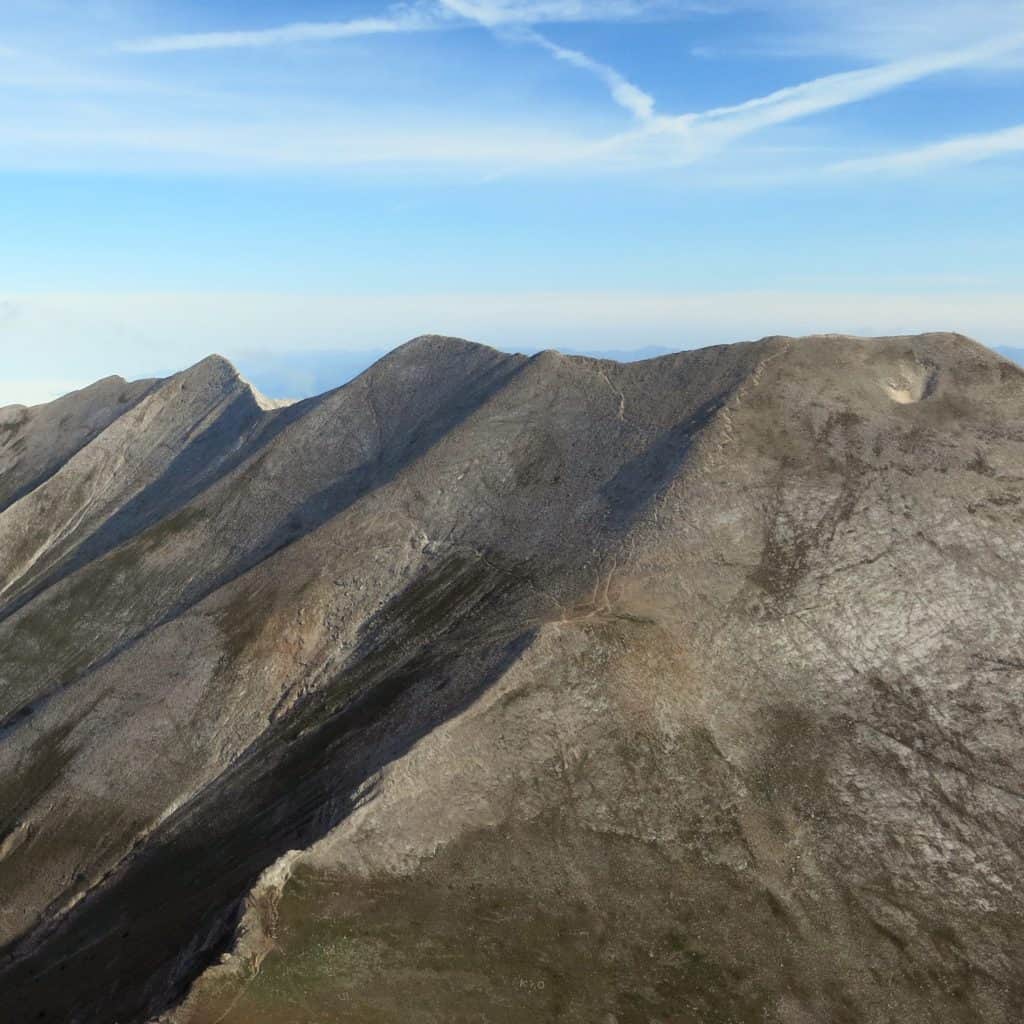 If you ask a Bulgarian hiker “Which is your favourite mountain?” its very common that you’ll get “Pirin Mountains” as an answer. Why is that? Pirin attracts the outdoor lovers with its glory to the “most difficult” Bulgarian mountain as much as the reputation of the sunniest mountain range. With its rocky peaks and jagged ridges, glacial lakes and centuries old forests, Pirin has an image of a real alpine-like mountain, paradise for those who like walking in the mountains, surrounded by airy views and stunning landscapes. Its proximity to the Mediterranean Sea determines the mild and sunny climate, but also ensures a good amount of snowfalls in winter, brought here by the Mediterranean cyclones.

Of course, the first impression of the mountains is when you see them from down the valley – in this case for the majority of the visitors this is the Razlog Hollow – a flat area between Rila, Pirin and Rhodope Mountains, where are located the biggest town in the area – Razlog, and the most popular starting point for hiking in Pirin Mountains – the town of Bansko. Bansko is also the biggest and most modern Bulgarian ski centre. The first look towards the mountains after crossing the Predela Pass is astonishing and imbues respect. The whole main ridge of Northern Pirin is seen stretching from the north-west to the south-east – rocky peaks and high mountain passes which are the top part of long valleys that cut the mountains all the way down to the hollow.

Outdoors in Pirin Mountains – Pirin is a great place for a whole range of outdoor activities. Hiking and trekking in summer is possible following the extensive network of marked tourist trails and staying overnight in mountain chalets and lodges. Ski touring and snowshoeing are possible in winter, but only for those who have the experience and the respect towards the severe weather and terrain. The lower parts of the mountains are ideal for mountain biking as well as for easier forest walking. The ski resort of Bansko offers good opportunities for skiing – on the pistes or off-piste. 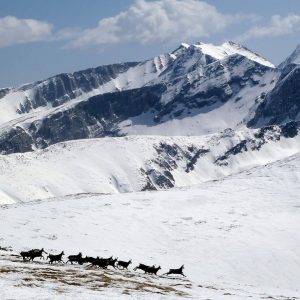 A herd of Chamois in Northern Pirin Mountains, on the main ridge west of Mount Dautov

Wildlife in Pirin Mountains – the main part of its territory is a protected area – Pirin National Park, created in 1962. It hosts some of the best conifer forests on the Balkans, including the endemic Macedonian Pine, Bosnian Pine and Bulgarian Fir. Here can be found the oldest pine tree in Bulgaria – a 1300 years old Bosnian Pine, called Baykusheva Mura. The tree is located on the way to Vihren Hut from Bansko, at about 1800 meters above the sea. Pirin Mountains are home of the beautiful alpine flower edelweiss, symbol of the mountains. The most common animals are Chamois, which can still be seen running in a herds of 10-20, also the Brown Bear, Wolf, Roe Deer, Eagle, Falcon, Capercaillie.

The name of Pirin originates from the name of Perun, who was the main god of the Slavic pantheon – the god of the thunders and lightnings. The Tracians called the mountain Orbelus, which means “The white mountain” – because of its covered in marble ridges Pirin Mountains look white not only in winter, but in summer, too. The climate is influenced by the Mediterranean air masses that move along the valleys of Struma and Mesta rivers on both sides of Pirin Mountains, but also is determined by the relatively high altitude of the area. Pirin is the sunniest mountain in Bulgaria, but also the rockiest and steepest.

Geography of Pirin Mountains  – Pirin is a mountain range in the southwestern corner of Bulgaria, part of the Rilo-Rhodopean Мassif.  Pirin Mountains are located in the so called Macedonian parts of Bulgaria – a range with unique culture and dialect, which is sometimes not understandable for the rest of the country. They are located about 100 km away from the capital Sofia – if you drive along the main E79 road from Sofia to the Greek border, you’ll see the most western peak of the main ridge – Mount Pirin, shortly after reaching the town of Blagoevgrad. The main ridge of the mountains stretches from the northwest to the southeast and is about 80 kilometres long. The geographers find three distinct parts of the mountain – Northern, Central and Southern Pirin. 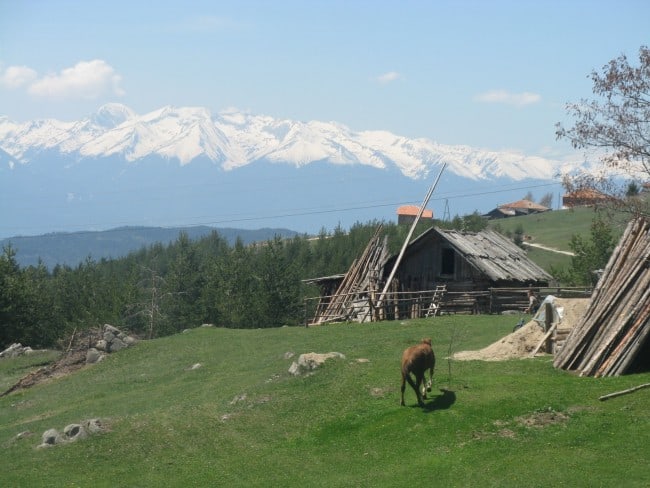 Northern Pirin Mountains – Mount Vihren, The Foal and the Marble Ridge, as seen from the nearby slopes of the Rhodope Mountains

Northern Pirin is the highest and most impressive, third in elevation on the Balkans after Rila Mountains and Olympus Mountains in Greece, with three peaks above 2900 m. Northern Pirin is separated by Rila Mountains through the Predela Saddle, at 1100 m, which offers an impressive view to the Pirin’s main ridge – this part of the ridge, between Mount Pirin and Mount Vihren is covered in marble (the rest is granite) and is famous with the many high and sharp peaks, also the so called “The Foal” – one step wide part of the ridge with huge drops on both sides. Other famous peaks in Northern Pirin are Kutelo, Banski Suhodol, Todorka, Polezan, Kamenitsa. The central parts of Northern Pirin hosts all the lakes in Pirin Mountains (about 160), usually they are located in groups of a few. The biggest lake in Pirin is Popovo Lake – 336 m wide and 29,5 meters deep.

Central Pirin – the shallow ridge of Central Pirin is stretched between Popovi Livadi Saddle (1430 m) and  Todorova Polyana Saddle. The highest point is Mount Orelyak (2098 m), located above the town of Gotse Delchev. There is a TV tower on the top, which is accessible by an fairly easy hike from Popovi Livadi Pass. there is a hut (Popovi Livadi Hut) at the highest point of the pass, which is reachable by an asphalt road (the road towards Melnik), and further a dirt path goes up to the top. The only other hut in Central Pirin is Malina Hut, below Todorova Polyana Pass, on the west side of the mountain. The whole Central Pirin main ridge is doable for a day – from Popovi Livadi Hut to Malina Hut or Pirin Hut. Most of the mountain is covered by broad leaf forests.

Southern Pirin – much lower than the other parts, highest point is Mount Ushite (1977 m). Another popular peak is Sveshtnik, accessible by the road at Popovi Livadi Pass. It is less visited and developed in terms of tourist infrastructure – huts and trails. Covered mainly by lush broad leaf forests.

Most of the interesting hiking routes are located in Northern Pirin. Aside from the main E4 European Long Distance Walking Path (read more about the Bulgarian Parts of E3, E4 and E8 paths) that crosses Northern and than Central Pirin and Slavyanka Mountains, most trails criss-cross the Northern Pirin Mountains. Main starting points are: the ski zone of Bansko/Vihren Hut – an asphalt road goes up to 1950 m at Vihren Hut; Bezbog area – there is a chair lift from Gotse Delchev Hut up to Bezbog Hut at 2240 m; Popina Laka area above the town of Sandanski – an asphalt goes up the mountain at nearly 1300m. The following huts are located in Northern Pirin – Bunderitsa Hut, Bezbog Hut, Vihren Hut, Yavorov Hut, Demyanitsa Hut, Gotse Delchev Hut, Tevno Ezero Hut, Sinanitsa Hut, Spano Pole Hut, Kamenitsa Hut, Pirin Hut,  Yane Sandanski Hut. There is also one official campsite – Bunderitsa Campsite, and a couple of tourist shelters – Koncheto Shelter and Kazana Shelter. It is also possible to stay overnight in the town of Bansko, the village of Dobrinishte and in the town of Melnik.

Pirin National Park – the park is established on 8th of November 1962 with the aim to protect the biodiversity of Pirin Mountains. The territory of the park borders seven municipalities – Bansko, Razlog, Gotste Delchev, Strumyani, Kresna, Simitli and Sandanski. The park directorate is located in the town of Bansko. In 1983 Pirin National Park was granted with inclusion to the Convention for the Protection of World Cultural and Natural Heritage of UNESCO. There is tree nature reserves which are part of the territory of the park – two of them within its territory – Bayvi Dupki-Dzindziritsa Reserve and Ulen Reserve, and one outside the park borders – Tisata Reserve.

Bayvi Dupki-Dzindziritsa Reserve is one of the oldest reserves in Bulgaria, established in 1934. It is located in Northern Pirin, and covers territory between the Pirin and Banski Suhodol peaks, other peaks in the area are Dautov, Kamenitisa, Razlozki Suhodol. The circues of Razlozki Suhodol and Bayvi Dupki are part of the reserve. The international E4 long distance trail goes through the reserve from Predela Pass to Vihren Hut. It protects  large forest areas of the endemic Bosnian Pine and Macedonian Pine, about 500 vascular plant species, 55 endemic plant species and many endangered ones. Typical for the fauna are the Chamois, Roe Deer,  Wild Boar, Brown Bear, Fox, Capercaillie, Nutcracker, Woodpecker.

Ulen Reserve was created in 1994. It covers a territory at height between 1650-2851 meters above the sea in Northern Pirin Mountains. The lower parts are mainly covered by White Fir, Spruce, Dwarf Pine and White Pine forests, also some centuries old Bosnian Pines. Higher up, there is plenty of well defined glacial forms – lakes, jagged granite peaks and valleys. These are Todorini Ochi Lakes (The Eyes of Todorka), Kurkumski Lakes, Polezanski Lakes, Vasilashki Lakes, Tipitski Lakes, etc. The highest point of the reserve is Mount Polezan (2851 m), the biggest valley – Demyanitsa River Valley. The flora includes about 700 higher plant species, 44 of which are in the Bulgaria’s Red Book of endangered species. Typical representatives of the big mammals are the brown bears and the wolfs, there is also a huge variety of birds.

Tisata Reserve was created in 1949 and is nowadays located on the west foothills of Pirin Mountains and the east foothills of Maleshevska Mountains, on the both sides of Kresna Gorge. It was created with the aim to protect оne of the biggest fields of Juniperus Excelsa in Europe – a protected specie that originates from Asia Minor. The reserve’s territory is much lower in altitude – between 300-700 m. Nearby towns are Kresna and Gorna Breznitsa. The climate here is heavily influenced by the Mediterranean air masses coming along the valley of Struma River. The landscape is mainly forested, with cinnamon soils. The warm climate determine the representatives of the flora and the fauna – most of them are characteristic for the Southern Parts of Europe, with many rare species. The reserve has also ornithological importance, with 109 species of nesting birds. There is also a huge number of reptiles – 16, and 11 of them are snakes.