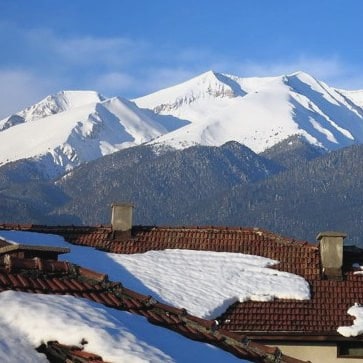 In the midway between the three most beautiful mountains in Bulgaria – Rila, Pirin and Rhodope mountains is located a not so large but very intriguing town, named Bansko. It is a famous destination to everyone who is interested in skiing, snowboarding and in fact of the whole range of winter sports. This mountain resort became very popular tourist destination in the last decade but the history it keeps inside is mush older.

There is a legend connected to the foundation of the town which tells the story of the blinded soldiers from the army of Tsar Samuel, the last ruler of the First Bulgarian Kingdom. When the Byzantine Emperor Basil II won the final battle in the war between the two Empires, he ordered all Bulgarian soldiers to be blinded and to every hundred people left a warrior with one eye to guide the others. For this cruel act he stayed in the history as – Basil II “the Bulgar-slayer”. The soldiers heard that near the village of Dobarsko (26 km from Bansko) has a spring with healing water which can alleviate the pain from their wounds and especially that in the eyes. So part of them settled in the village and soon after that founded the settlement of Bansko. 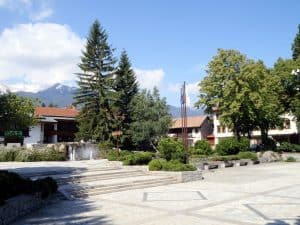 Although the resort is situated on the foot of Pirin Mountains, when you lift your gaze to the north you will be dazzled by the white snowy peaks of Rila Mountains and to the west you will see the evergreen slopes of Rhodope Mountains. This extraordinary location offers to the tourists a wide variety of activities in every time of the year. Most of the ski runs in Bansko stretch at the foot of Todorka peak (2746 m). They are around 40 km long with different level of difficulty and varied purpose. There are ski lifts and rope-lines which provide access to the runs. Except for the skiing in the resort has built a route designed for the fans of the ski running and the biathlon. So to make a long story short, Bansko is the place for everyone who are addicted to the winter sports.

The best period for the lovers of cross-country mountain biking to visit this part of Bulgaria is between the beginning of June till the end of September. The interesting and extreme relief of Pirin Mountains made Bansko the center of this popular summer sport in the area. Most of the routes cross the lower parts of Pirin National Park – one of the three national parks on the territory of the country. The seven main marked biking routes are with multifarious hardship, from 1 to 5. The hardest one is called Ponderosa and is 42 km long. For the beginners in this sport the best choice is Mud Bath route (15 km), the shortest and the easiest one.

Two of the most torrential rivers in Bulgaria – Struma and Mesta – flow through the Pirin National Park, near Bansko, and provide excellent opportunities for kayaking and rafting. At first the journey going downstream is calm and gives chance to enjoy the beautiful nature around. Soon however it continues to the Kresna Gorge and that is the moment when the journey became an adventure. The outstanding canyon formed by the Struma River is one of the most popular places in Bulgaria for all the lovers of the extreme sensations. Except the kayaking and the rafting near Kresna can be practised one of the most extreme and not so widespread sport – the canyoning. Basically it represents movement in deep riverbeds, waterfalls and cliffs using alpine techniques and equipment. It may include jumping, walking, climbing, rappelling (descent with double rope) and swimming. The route along the Vlahina River is the best for canyoning in the area. 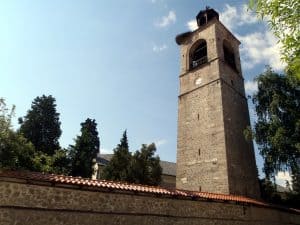 The church of Bansko

The first thing that you need to provide with if you decide to hike in Pirin Mountains is the proper equipment. The most important part of it is the good hiking shoes and the windproof jacket because the walking in the mountain is not like to go for a turn. There are many well marked routes suitable for a one day walking or for a trekking tour. The larger part of the itineraries starts near the many huts under the lee of the mountains like Vihren, Demyanitsa, Banderitsa and so on. You can reach Vihren chalet by car and from there is the starting point to some of the popular peaks in the area – Vihren, Golyama (Big) Todorka and Muratov Peak. The hike to all of the peaks takes around 4 hours and reveals amazing views from the Pirin Mountains.

The outstanding places in the mountains around are so many that you need a large amount of time to visit them all. Bansko, itself, also has many interesting sights which deserve attention. The town is a birth place to three of the greatest personalities from different ages of Bulgarian history like Nikola Vaptsarov (an amazing poet and active anti-fascist), Neophit Rilski (a leading figure in the Bulgarian educational movement) and Saint Paisius of Hilendar (the author of the famous Istoriya Slavyanobolgarskaya). Their homes are turned into museums, where you can get backward in the past and follow the path of these great people.

It may safely be said that one of the intriguing objects in Bansko is the main church – named Holy Trinity. The history of its building is a bright example for the strength and the faith of the people here. It is constructed in 1835 on the initiative of Lazar German (dqdo Lazko) – a man of note and a mayor of the town. Every single citizen of Bansko took part in the construction and helped with whatever they could. Under the main entrance, as a symbol of the tolerance between the Christians and the Muslims, was engraved together the Holy Cross and a star with a moon. The church inside is decorate by the most distinguished representatives of the Bansko and Debar Art School. The whole temple is a magnificent and unique example of the architecture of the Renaissance in Bulgaria.