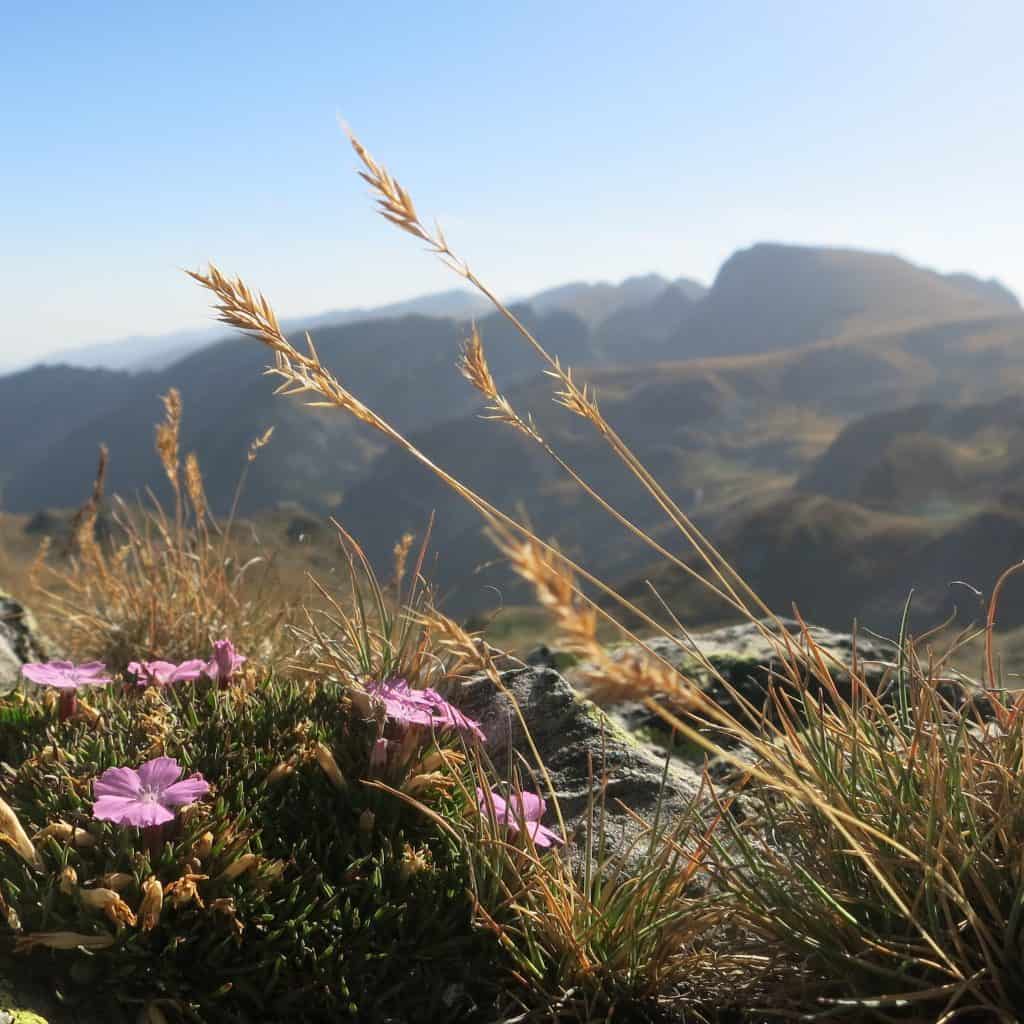 The great Rila Mountains are probably the most famous alpine range in Bulgaria. Not only because of their beauty and scale – they are the highest in the country and on the Balkan Peninsula –  but also because of their special charm, fed by legends and stories about them. These start with the Tracian origins of the mountain’s name (Rila – well-watered mountain), following are the stories about the first ascent of the peak point of Musala by Philip of Macedon during 2nd century BC – an expedition that took 7 days. Also the unclear theories about the appearance of the name “Musala” – it is considered that the name of the highest peak of the mountains comes from Arabic and means “Close to God”. Than come the stories about Saint Ivan Rilski, the most honoured Bulgarian saint, who spend years walking from one place to another, praying and feasting as a hermit in these mountains, before establishing the Rila Monastery in Northwestern Rila. Rila is also a holy place for the sun worshippers of the White Brotherhood, a peaceful sect established in Bulgaria in the beginning of 20th century by Petar Dunov. They celebrate a New Year at the considered by them as a holy region of the Rila Lakes every August. Finally the reputation of Rila Mountains as favourite place for the members of the Bulgarian monarchy before WWII. They built the mountain resort of Borovets, some hunting lodges and paths around the mountain, some of them with the only purpose to organize a panoramic walk and show the beauty of the mountains to their guest – the Austrian Kaiser, during his visit to Bulgaria.

Nowadays Rila is mainly known as a place with unique preserved nature and as a paradise for the lovers of the outdoor activities. Its vast network of hiking routes gives plenty of opportunities for trekking trips. Among the most famous ones are the Rila sections of  the International Long Distance Walking Routes E4 and E8 (read more about these routes here). There is a good network of mountain chalets and shelters to spend the night while on a trip. This is also possible in some of the villages at the foot of the mountains – Govedartsi, Mala Tsurkva, Madzare, Beli Iskar, Sapareva Banya and so on. It winter, snowshoeing and ski touring trips are possible between January and April. The Malyovitsa area is a popular rock climbing destination, so the Skakavitsa area is famous with the ice climbing routes, although for a relatively short period during winter when the waterfalls are frozen. The nowadays Borovets ski centre, the successor of the former royal mountain resort, is not far from the capital Sofia and is a good place to ski – both pistes and off-piste. The lower parts of the mountains offer many options for mountain biking.

Hiking in Rila Mountains – the main starting points of the walking routes are:

The vast network of summer and winter hiking routes cross-cross the whole mountain. Day routes are possible, even if you start from Sofia in the morning and wish to return back on the same day. This way is possible to visit the Seven Rila Lakes, Mount Musala, Malyovitsa area. Here are some examples of  day and multiday routes: 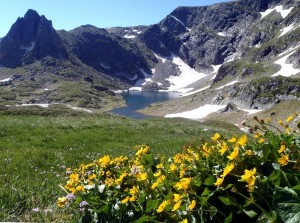 More about Rila Mountains – they are situated in the southwestern parts of Bulgaria, about 50 kilometers away from the capital Sofia. This range is part of the Rilo-Rhodopean Massif, the oldest landmass on the Balkans. Rila is about 70 km long and 50 km wide and has an area of about 2 400 sq. km. It is a dome-shaped mountain, surrounded by planes, with a few high saddles connecting it to the neighboring mountain ranges – Pirin, Verila, Sredna Gora and Rhodope Mountains. During the last glaciation the border of the permanent snow was at 2100 meters a.s.l. and above these line the glaciers carved out deep cirques which host a blue glacial lakes in present, and sculpted sharp peaks, valleys, moraines and other glacial formations. 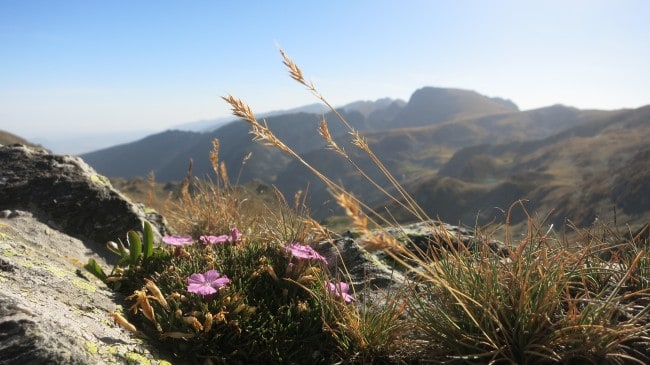 The name “Rila” has Tracian origin and means a “well-watered mountain”, referring to the numerous glacial lakes, streams and rivers (including some of the biggest in Bulgaria – Iskar, Maritsa and Mesta) that spring from the area. Some of the ridges in Rila set the watershed border of the country – which simply means that most of the water on the south slopes goes to the Mediterranean Sea and most on the north slopes – to Danube River and eventually to the Black Sea. Another resource are the thermal springs in the foot of the mountains – in Sapareva Banya (the hottest on the Balkans – 103 degrees), Blagoevgrad, Kostenets, etc.

Geographically, Rila Mountains are separated in four parts – Eastern, Central, Northwestern and Southwestern Rila. And while the highest parts, including the highest point on the Balkan Peninsula – mount Musala (2925m/9740ft above sea level) are located in Eastern Rila, some of the most interesting sights are in the northwestern range. These are the valley of Malyovitsa, Skakavitsa Waterfall, The Seven Lakes Cirque and Rila Monastery (Bulgaria’s biggest monastery, founded in 10-th century).

Eastern Rila, also known as the Musala Range, is the highest part of these mountains. The top of Rila – Mount Musala (2925 m) – and 12 other of the the peaks higher than 2700 meters above the sea – Malka Musala, Bliznatsite, Mancho, Irechek, Aleko, Deno, etc. are located in this area. Among the most popular lakes in the area are Musala Lakes (with the Icy Lake or Ledenoto Ezero – the highest on the Balkans – 2709 m), Maritsa Lakes and Ropalitsa Lakes. The biggest ski resort in Rila – Borovets Ski Resort – is situated here, in the foot of Mount Musala. Another landmark in these mountains is the large Belmeken Dam, located at 2000 masl.

The Central Rila Mountains are a tinier part of these mountains and most of it is taken by Central Rila Reserve. There is a lot of glacial lakes in the area, including the largest glacial lake on the Balkans – The Stinky Lake (Smradlivoto Ezero, 21,2 square kilometers). One of the biggest Bulgarian Rivers – Iskar River – originates from these mountains. Here, in Beli Iskar Valley, on the border between Central and Eastern Rila, is located Beli Iskar Dam – a huge artificial lake that supplies Sofia with water.

Northwestern Rila covers about 25% of the total area of the mountain and has also the rockiest and most “alpine like” landscapes. The highest peak in the area is Golyam Kupen (2731 m), but most famous one is Mount Malyovitsa (2729 m). There is many famous sights in this area – Skakavitsa Waterfall, Skakavitsa Reserve The Rila Lakes, Rila Monastery, The Frightful Lake, Urdini Lakes. 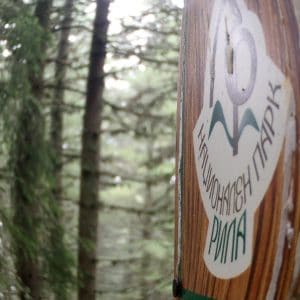 Rila National Park – Rila Mountains are a significant nature preservation site that is a protected territory (link to the official website of the Park) with 4 reserves (Central Rila Reserve, Parangalitsa Reserve, Skakavitsa Reserve and Ibar Reserve) within its territory and the Rila Monastery Nature Park, that is covering a territory around the Rila Monastery. Established in 1992, Rila National Park is UNESCO-listed as primary significant for the nature preservation in Europe. Covered by thick forests, mainly spruce, white fur and Macedonian pine, the park has a great variety of habitats, practically untouched by a human activity. The area is home for most of the mammals that are presented in Bulgaria’s nature and 99 species of birds – some of them nearly extinct worldwide. Many endemic and relict (survived the last glacial period) plant species are preserved there, including some extremely rare – 24 are listed in the IUCN Red List.

General information about the park: it is located within the territory of four administrative sections: Sofia, Blagoevgrad, Kyustendil and Pazardjik and eleven municipalities: Blagoevgrad, Dolna Banya, Simitli, Razlog, Belitsa, Belovo, Yakoruda, Kostenets, Samokov, Sapareva Banya and Dupnitsa. The total area of the park is 81,046 hectares, with forested area of 53,481 hectares and alpine area of 27,565 hectares. 90% of all ecosystems within the park are natural. The highest point of the park is Mount Musala – 2925 meters, the lowest – the area above the town of Blagoevgrad – 800 masl. There is four reserves (territories with strongest protection level) and one nature park inside its territory.

Flora – there is  about 1,400 higher plants species, 282 mosses, and 130 species of freshwater algae are found within the territory of the park. Vastly spread among the species here are the higher plants. They are totally 38.35% of the entire flora of Bulgaria. Most beautiful among them are the Rila Cowslip, the Rila Rhubarb and the Lady’s Mantle – all of them are Bulgarian or Balkan endemic species. There is totally 57 species which are  endemic to Bulgaria or the Balkan Peninsula within Rila National Park. Some of the lake shore and rocky species here have survived since the last Ice Age – these form the large group (105 totally) of the glacial relicts. 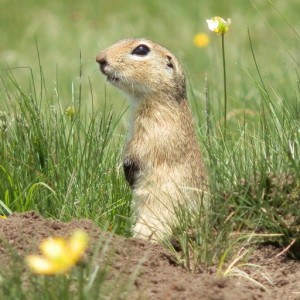 The Fauna of Rila National Park – the area ranks among the most significant of the protected territories in the country and Europe as a whole. Its territory has a very diverse network of habitats, most of which are preserved nearly untouched by human activity and host diverse animal communities. The fauna of the park is extremely diverse, consisting of  2,934 species of invertebrate organisms, 172 species of vertebrates, most of which form numerous and viable populations.

Five species of fish, 20 species of amphibians and reptiles, 48 mammals, and 99 species of birds represent the vertebrate fauna. Twenty-four of these vertebrate species are included in the World Red Data Book as nearly extinct. Chamois, Capercaillie, Hazel Grouse, European Pine Marten, Rock Partridge, Boreal and Eurasian Pygmy Owl and the only one high mountain population of the European Ground Squirrel live in the Rila National Park’s territory. The big predators are represented by the Brown Bear and the Wolf. There is also a healthy and vast population of birds of prey living in Rila Mountains. The park also host a group of birds common for the high mountain zone: the Wall Creeper, the Alpine Chough, and Alpine Accentor.  Rila is also an ecological corridor among Front-Asian, Mediterranean and European fauna.