In Bulgaria many rivers form a very beautiful gorge valleys. Zemen Gorge – the creation of the Struma River, in no way inferior to any of them. Located between the Zemen and Konyavska Mountains it begins directly from the town of Zemen and ends at the village of Razhdavitsa. It is one of several gorges that form the Struma River on Bulgarian territory. Much calmer than the famous Kresna Gorge, it will offer not less interesting views. Zemen Gorge is extremely rich in natural beauties – waterfalls, caves, meanders (bends of the river bed in the form of a horseshoe), rock rave and many others.

Besides undeniably stunning scenery, near the gorge there are numerous objects bearing priceless historical and cultural value. This place has several monasteries and ancient churches. Walking around, you will find remnants of the former medieval fortress-city Zemlangrad. It was found that the earliest remains there are dated back to the V-VI century. The fortress had major strategic importance in the X century, when the centre of the Bulgarian country moved from Preslav to Sredets and Ohrid. This area has offered shelter to some of the most glorious Bulgarian chieftains and fighters against the Ottoman slavery. The remains of the walls can be seen on top of a steep hill a few hundred meters to the left of the railway line, if you move from Zemen to Razhdavitsa. In this place additional landmark is one of the tunnels and the trail to the fort, deviates left, shortly before it, near a group of old barns. From there it takes perpendicular to the railway line and gradually ascends among grass and rock formations to the ruins where lonely raises a large old oak. There is not much left from the walls but they look quite authentic, unlike some restored fortifications, of which quite openly protruding reinforcing rods and other modern appliances. The area of the fortress is one of the most remarkable places in the Zemen Gorge.

From the Zemen fortress is revealed a magnificent view of the rich greenery surrounding mountains. On the opposite slope you will see interesting rock formations – Ritlite. Indeed, they are not as impressive as the more famous in the Iskar Gorge, but still they exist and worth seeing. Besides them, your gaze will be attracted by the many sharp conical rocks protruding from the Zemen Mountain beyond Struma River. Similar forms can be seen at the beginning of the gorge, near Zemen, located high above the right bank of the river, near the first tunnel. In spring time the area is so deep green that it is definitely the best season for visiting. 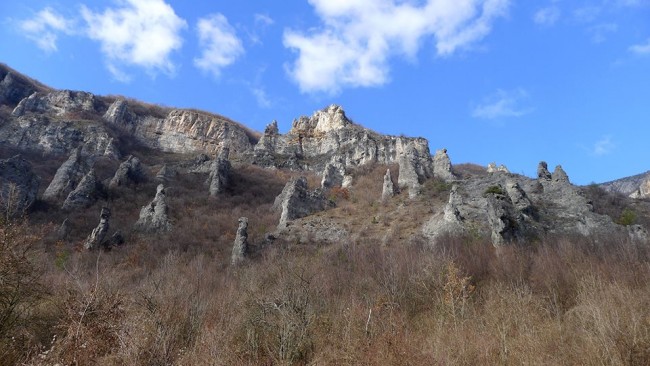 The only road which passes the Zemen Gorge is a railway, the automobile roads surround it. Regardless of which station (Razhdavitsa or Zemen) you decide to set out, for 6-7 hours you could pass along the entire length of the gorge, following a pleasant trail near the train line. This trail deviates from the rails only when you need to work around the tunnels. It gives you the opportunity to enjoy the diverse landscapes of the gorge, which is about 22 km long. Sunny meadows alternate with pine forests and the meanders of the Struma River surround the majestic cliffs and pinnacles. During the detour of the tunnels, the route sometimes passes through passages that are hanging over the river – they are not too risky but still need attention in coping with them. The trail winds among a pretty desolate neighbourhoods and abandoned houses – seem a little sad but on the other hand the surroundings are quiet, calm and without noisy crowds, which is a major plus.

In the southern part of the gorge is the beautiful waterfall Polska Skakavitsa, declared a natural landmark. The waterfall is located near the small river Shiroki Dol – right tributary of the Struma River. The water falls from a height of about 50 meters, passing through a couple of rocky terraces. It is shallow but incredibly beautiful. In Bulgaria is third in height. The region has a unique flora and fauna – over 19 species of fish and more than 600 species of plants, some of which protected. Here is the only place in Bulgaria where you can see both five species of swallows. On the rock at the top of the waterfall is the church dedicated of St. Demetrius. 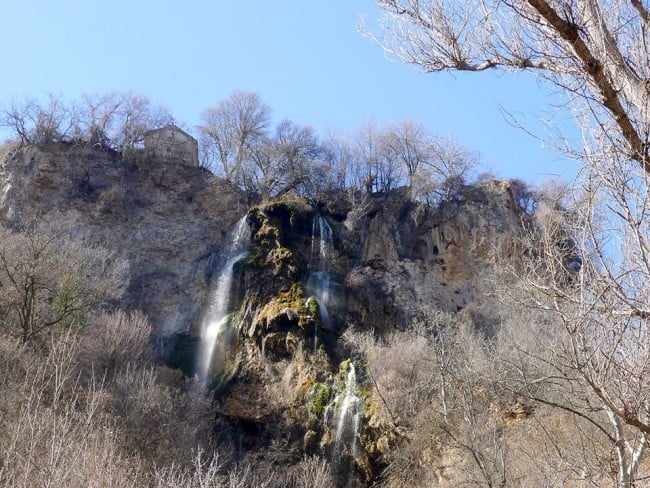 Two kilometres away from the centre of the town of Zemen is situated one of the most valuable monuments of the Middle Ages – the Zemen Monastery “St. John the Theologian”. It is not large and famous as the Rila and Bachkovo Monastery but just like them is hiding unexpected secrets and treasures. The monastery was burned many times. Phenomenal is that its fence and building were pulled down and restored repeatedly but the church with the frescoes wasn’t destroyed and has survived more than seven centuries. The popularity of the monument is not only because of the interesting architecture but also because of the remarkable frescoes of biblical scenes from the 14th century. They are completely preserved and made in a unique to the Bulgarian lands archaic decorative style.

Except the intriguing history of the monastery, the park around it is wonderful place for resting among the nature. It is also a beginning for one of the newest eco trails in Bulgaria, named Zemen Gorge. The eco path has a length of about three kilometres. It starts at the area, named “Eagle’s Nest” near the monastery and ends in “Shiroka Ornitsa” over the first tunnel on the railway line Zemen – Kyustendil. Along the trail were built four camps for recreation, entertainment and sport, equipped with sheds, gazebos and benches, playgrounds, outdoor fitness, barbecue and rockery.