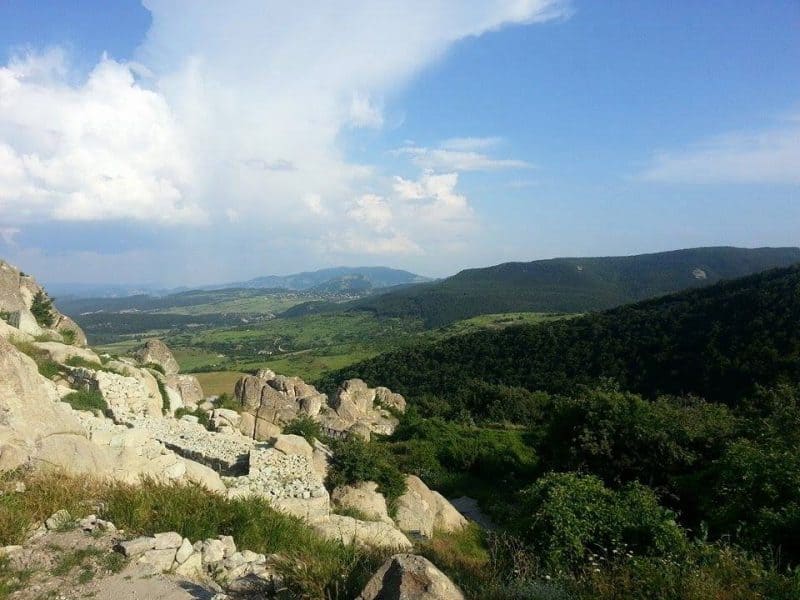 Perperikon (or Perpericon) is an archaeological complex in southern Bulgaria, sometimes called “the European Machu Picchu”. The complex is located in the Eastern Rhodope Mountains, some 15-20 km northeast of the town of Kardzhali. It is an ancient Thracian city that stands on a rocky hill at a height of 470 meters. At the foot of the hill you will find the village of Gorna krepost, and near it flows the gold-bearing river Perpereshka. The area was settled in ancient times as the river valley created good conditions for life for the local tribes. Therefore there are various archaeological sites from different ages throughout the valley that form a complex, and Perperikon is its center.

The first traces of human activity in the area date back to 5000 BC. However, archaeologists are mainly interested in the more recent civilization (1500 BC), which has given us a unique example of a huge Thracian city in the Balkans. It is namely this city – with a complex and complete structure with buildings, streets, squares and a water supply system – that is sometimes called “the European Machu Picchu”, or the “Stone Pompeii.”

The place was a center of religious activity already in the V century BC, with sacred rituals performed with wine and fire in the name of the god Dionysius. This is why some believe that this is where the long sought temple of Dionysius in the Rhodope Mountains was. There are also various archaeological researches that support this hypothesis.

Gradually the rock structures were expanded to become a whole town, which had fortified walls, palaces, residential neighborhoods, schools, etc. It is believed that the Thracian tribe Bessie had its royal residence here before the Romans came around V century AD. They converted the local tribes to Christianity and Perperikon became the Episcopal center of the region. During the Middle Ages the site also flourished as an administrative center under the name Ahridos, until the XIV century when the fortress was conquered and demolished by the Ottoman troops coming from Asia. The Ottoman Empire stayed in Bulgaria’s territory for nearly five centuries, so the ancient city sank into oblivion.

At Perpirikon archaeologists have shown particular interest in an impressive round altar hewn straight out of the rock. The altar, measuring 6 feet (almost 2 meters) in diameter, is where, as it is believed, Tracians have practiced different fire rituals such as dancing on hot coals (a tradition know in Bulgaria as nestinarstvo). When the pagan Tracians were eventually Christianized (around 500 AD) a small church pulpit was erected at the place where the ancient altar was.

The temple has the form of a single nave basilica some 16.5 m long, richly decorated with stone-carved ornaments and almost untouched by time. This form was the most typical one for a religious temple in the early years of Christianity. On the rock one can clearly see an eagle with its wings wide spread. Archaeologists have also uncovered five inscriptions in Greek, and although there is no certain explanation of their meaning yet it is believed that they are liturgical writings.

The site is currently managed by the History Museum of Kardzhali, and many of the artifacts found there can be seen in the museum.